Cigarette Cards which include scenes from Limerick

Cigarette cards were originally produced as a small piece of card that was designed to protect the individual cigarettes from being squashed as the original packaging was paper and not the card boxes that we know today.

Instead of leaving these pieces of card blank the cigarette manufacturers soon began printing promotional messages on them. Eventually, they produced ranges of designs, photographs of sports stars, movie stars, landscapes. Collectors would attempt to put full sets together by purchasing a single brand or trading with others. This promotional idea soon spread to include bubble gum to attract younger customers.

The following are cigarette cards produced by Gallaher Limited Cigarettes featuring Limerick scenes. 1857 by Tom Gallaher in Derry, Northern Ireland. By 1896, he had opened the largest tobacco factory in the world in Belfast. 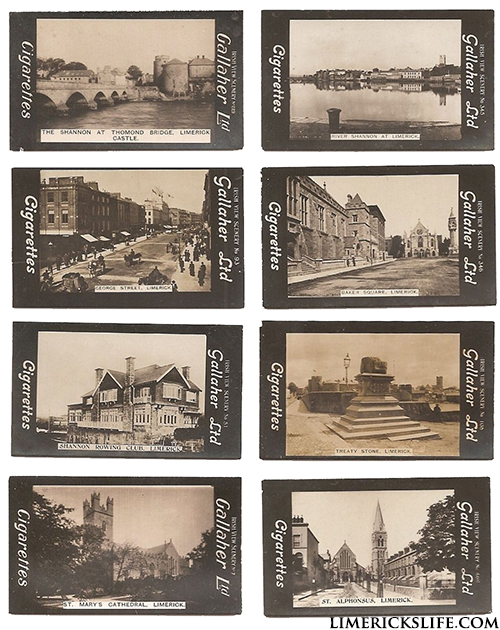 Some Limerick cigarette companies were: Clune Tobacco based on Denmark Street with a store on William Street. Spillane who was based on Sarsfield Street and produced Garryowen Plug had an Irish setter as their emblem. Finally Clarke and McNamara.