Limerick Gloves So Delicate They Fit In A Walnut Shell

Limerick Gloves were once highly priced among the rich and famous for their delicate nature.

In the early part of the 19th century Limerick was famed for gloves of pale yellow leather so thin that a pair could be folded up and placed inside a walnut shell – a dainty gift for a one’s ladylove. These are usually called ‘chicken skin’ gloves, which is, perhaps, a deliberate misnomer designed to hide the disagreeable fact that they were actually made from the skins of unborn calves. The hand-stitching is usually about thirty-two stitches to the inch and one pities the women and girls who scraped meagre living from such exacting work. – Leather Craftsmanship J.W. Waterer 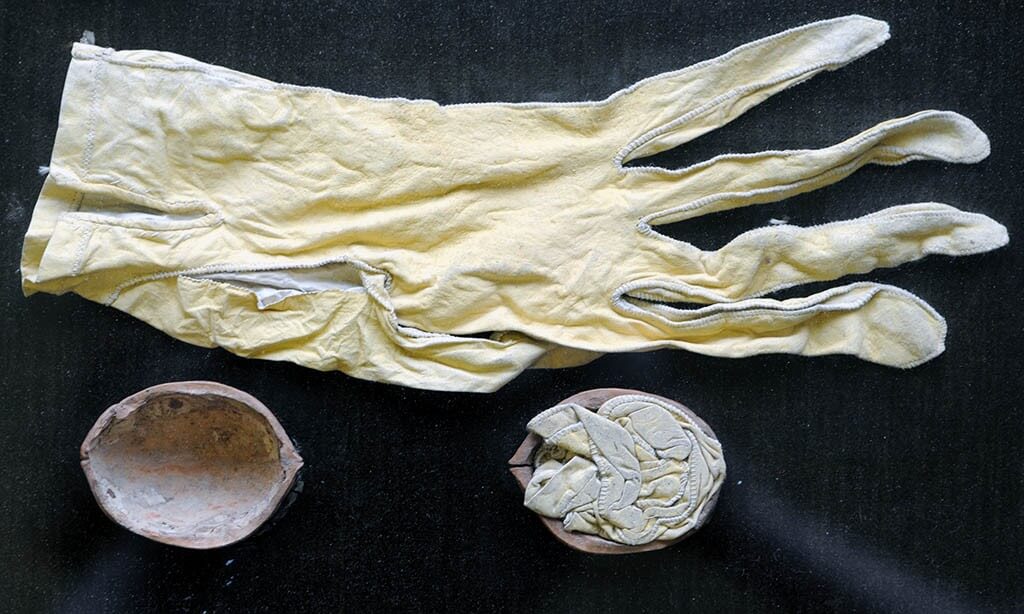 These gloves were were ridiculously thin and delicate. The gold standard was determined by the walnut shell test. If the pair could be folded so tight that they would fit into a walnut shell, they were suitable for the upper classes. Some pairs were so delicate that they could only be worn once.

The gloves were prized, not only for their delicacy, but also because they were smooth inside as well as out. This was something unknown in a leather glove at the time. They were very popular as a means of skin care. In some cases they were infused with oils, and worn at night to help keep ladies’ hands plump, soft, and white.

Although attempts were made to manufacture them outside of Limerick even as far away as France, those from Limerick were considered the finest.

The Limerick Chronicle of April 11, 1835 wrote of the process of producing a pair of these gloves:-

“Celebrity of Limerick Gloves – It used to be the custom of the south-west of Ireland to slaughter many cows while in calf. The skins of these unborn calves were of extraordinary fineness and delicacy, and from such was prepared the leather of which the celebrated Limerick gloves were made. This processes however, is almost discontinued, and whatever merit the Limerick gloves may still possess, is owning to the skill of the manufacturer, and not to the superiority of his raw material.”

The first known manufacturer of these famed gloves was Cornelius Lyons. Lyons was registered as a glover based on Main Street [Mary Street], Englishtown in the 1769 trade directory of the city. He showed off the fineness of his gloves by packing each pair in a walnut shell, which proved to be a very effective marketing strategy as they were desired by even royalty. The gloves would continue to be packed in this fashion by the Lyons family until the 1830s.

Daily, for two weeks from February 16, 1786 a notice was posted in the Sanders’s News-Letter stating:-

“Limerick Gloves. James Lyons, Son and Successor of the Late Con. Lyons, (who was the original and sole Proprietor of the much admired Queen’s Gloves) thinks it incumbent on him to inform the Public, that he does not supply any Shopkeepers with said Gloves, and that and sold for his Father’s and his Make in Dublin or elsewhere, are an imposition. All Orders for Gloves to said Lyons shall be duly executed in Limerick, where alone they can be had. Limerick, 11th February, 1786.”

By 1788, Cornelius’ son James Lyons was registered as ‘Manufacturer of Queen’s gloves’. The Museum of London holds a pair of Lyons made gloves from 1816 owned by Princess Charlotte.

Sadly, James Lyons died around 1833, childless and the last link back to the original Limerick Gloves died with him.

“Newcastle Races there will be a race for a Ladies’ Bonnet plate, to be rode by gentlemen, wearing Limerick Gloves, and Caps trimmed with Limerick Lace.”

The fall from favour

The decline in Limerick gloves began in the 1820s in two main parts. Firstly, in 1825, which removed the prohibition of foreign gloves into the British market. The smaller Limerick companies could not cope against the sudden influx of gloves from throughout Europe, these foreign gloves were much more varied in fabric and style and due to this they could keep up with fashion trends where Limerick gloves could not.

Secondly, other companies outside of Limerick began producing poorer quality gloves under the name of Limerick gloves. This lowered the appreciation for the original product and severely harmed their reputation. Sadly, by the 1840s most gloves bearing the name Limerick gloves on the market were produced in Cork.

Despite this decline, Limerick manufactured gloves remained popular with the young Queen Victoria. The Chronicle of November 2, 1839 wrote:-

“Mr Burke, of Patrick-street, glover to her Majesty, has received an order from Winsor Castle, per Sir Gore Ouseley, for 12 dozen pair of celebrated Limerick gloves for her Majesty’s own use. The order, when completed, is to be forwarded by Miss Ouseley, of the Crescent.” 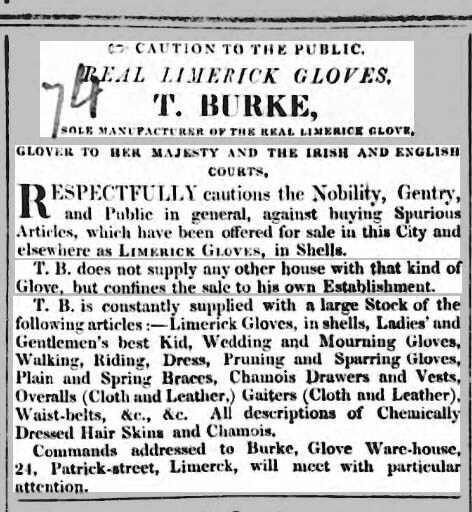 A month later on December 7, 1839, the Chronicle wrote that

“Mr. Burke, of Patrick-street, Glover to her Majesty, last evening forwarded per mail to the Marquis of Normanby, Home Secretary of State, the second consignment of Limerick gloves for her Majesty’s special use, per Royal order.”

In 1867, there was only one traditional glove maker left in Limerick, Thomas Burke, 1 Bedford Row. Thomas was the son of Michael Burke and he took over the glove factory on Patrick Street in January 1843 following the death of his father. The Chronicle recorded his father’s death on January 18, 1843,

“Friday last, after a short illness, Mr Michael Burke, celebrated as the manufacturer of the Limerick Gloves, Patrick-street, an honest, industrious, and respected citizen, much regretted.”

The link between locally made Limerick gloves and Queen Victoria was severed with the death of Thomas Burke on July 27, 1869. The Chronicle wrote,

“This evening, at 19, Henry-street, after a short illness, Mr. Thomas Bourke, glove manufacturer.”

There is a surviving example of these gloves in the Limerick Museum, Henry Street. The pair date  from about 1800, with one of the gloves still folded into half a walnut shell, true to their origin.

Novelist Maria Edgeworth (1768-1849) wrote a love story involving Limerick Gloves in 1813.  These gloves were very popular with Queen Victoria, who also adorned herself with Limerick Lace.