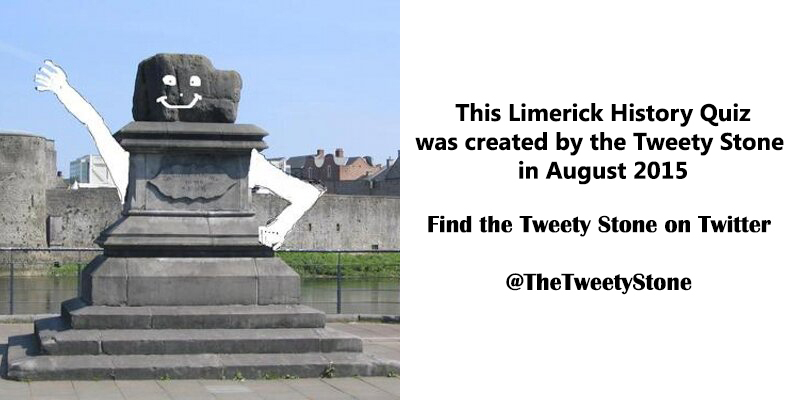 HOW WELL DO YOU KNOW LIMERICK? ANSWER THE FOLLOWING 10 QUESTIONS TO FIND OUT.

THE CLUES AND SOLUTIONS TO THIS QUIZ CREATED BY THE TWEETY STONE.

“A boy the kid” – Your knowledge of Limerick is “pure daycent”.

#1. Last Word by the Listener and I Mo Scríobháíl Féín (In My Own Scribble) were popular columns in The Limerick Leader in the 1960s, ’70s & ’80s. Who was the author of these often wry accounts of local politics, history and cultural affairs?

A selection of articles written by Séamus Ó Cinnéíde, who died in 1992, appeared in Last Word by the Listener (University of Limerick Press, 1999) edited by Eoin Devereux (Séamus’ nephew).

#2. Which of the following was located on Limerick’s Thomas Street (late 19th to mid 20th Century)?

Geary’s Hotel was once located at 45 Thomas St, and  later of 49/50 Thomas Street

#3. Pete St. John, who wrote The Fields of Athenry, is a brother-in-law of which former Mayor of Limerick?

#4. Where was the 1919 Munster hurling final between Limerick and Cork played?

Cork won the match; it was the first time Cork wore red jerseys .

#5. What was the name of the Unlucky Cabin Boy who lost his life in very gruesome circumstances aboard the Francis Spaight in 1835?

#6. In what year was Limerick department store Todds completely destroyed by fire?

Todds was rebuilt and reopened in 1963.  In recent years, Todds was rebranded as Brown Thomas.

#7. Which of the following was a brand-name used by the world famous Limerick Clothing Company?

#8. In 1820, the ‘Colleen Bawn Trial’ was held in the old City Courthouse on Bridge Street in Limerick. At this trial, the great Daniel O Connell defended John Scanlon.  What was the name of the young girl Scanlon was accused of murdering?

Daniel O Connell was on the losing side on this occasion. Scanlon was found guilty of murder and hanged.

#9. What was the name of the large island in the Shannon chosen by Norse/Viking  settlers over 1,000 years ago as a perfect site to establish a colony? (This colony eventually became’ Limerick City’).

The Norse/Vikings called their new colony on the Shannon ‘Hlymrerkr’

#10. In the 6th Century, who is supposed to have prayed that strangers would always prosper in Limerick but the natives would be unfortunate and unsuccessful?