Limerick imprisonment of a lady in the Land League 1882 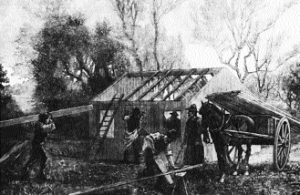 On the 21 April 1882, Judge Clifford Lloyd imprisoned Miss Anne Kirk, of the Dublin Ladies’ Land League, for three months in Limerick City Gaol. She was convicted for convincing the tenants in the district of Tulla, Co. Clare to not pay their rents. She had arrived in Tulla from Dublin to erect temporary wooden shelters for those who had been unfairly evicted. She was initially given the option of bail and to be bound to the peace, which she refused.

She spent six weeks in gaol before being unconditionally released by order of the Lord Lieutenant. While she was imprisoned, her friends would visit her and spoke to the press about the treatment of Kirk. They stated that she is only allowed two hours a day to exercise and can have visitors daily but they have to speak to her through the bars of her cell, which they deemed a gloomy apartment. Anna was the first cousin of George Harley Kirk, MP for Louth.

In 1845, the population of the Tulla parish was estimated at around 9,000. But by 1851 the population had decreased to roughly 6,700. The current population of the town of Tulla is 645. The Tulla Courthouse was completed in 1838. It was one of the longest serving courthouses in the country where district court sessions were held until 2008 when the Court Services amalgamated court venues. The Courthouse has had a colourful history being the focal point of the village where many magisterial investigations were held during the Land War years.

The Ladies’ Land League was founded by Fanny and Anna Parnell sisters of Charles Stewart Parnell in 1879. Fanny traveled to America in 1880 to raise money the Land League. While, in Ireland Anna became the president of the Ladies’ Land League, and the women held many protests and quickly became more radical than the men, to the resentment of the male leaders.