Limerick and the Titanic

Everyone knows the story of the Titanic; whether it’s a memory from primary school or that movie where love can conquer all, even the icy seas. One way or another, 100 years later, the story is as poignant as it was the day the Titanic hit the ill-fated iceberg in the Atlantic Ocean. There were 2,242 people on board the ship, 1,513 of which lost their lives that night, 9 of those who came from Limerick.

Names of the Limerick men who died on the Titanic:

All of the Limerick victims of the Titanic disaster were third-class passengers who boarded in Queenstown, Cork. As it can be seen above, eight of the nine Limerick victims were male, which we can assume to be a reflection on the women and children first priority that was put in place during the evacuation of the ship as well as the fact that there were a lot more men on board than women and children. That being said, one of the Limerick victims was a mere 16 years of age. It is unknown whether any of these people’s remains were recovered, but it’s a fact that sadly none were ever identified.

The morning of the 11th of April 1912, scores of Irish immigrants attended their last Mass in Ireland in St. Colman’s Cathedral and then made their way to the Deepwater Quay, where they boarded the tender “America” and were ferried out to the Titanic, which moored off Roches Point. This can be seen in the picture below, with actual 3rd class passengers gathered in Queenstown.

The ships manifest below show that Patrick Colbert, Patrick Dooley, Daniel James Moran, Patrick Ryan, and Daniel’s sister Bertha all boarded the Titanic together. Along with another unfortunate victim, Mr. Maurice O’Connor, 21, of Boherbue, Co. Cork, who had spent time in Ballinloughane, Limerick where he worked as a general labourer. Due to the fact that these six individuals not only found each other among the hundreds boarding the ship that day, they also kept company, as records go show that all five men also died together that day, showing that county ties were strong in this cross Atlantic journey. 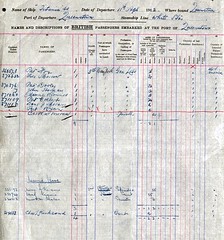 The two Moran siblings, Bridget “Bertha”, 32, and Daniel, 27, and their friends Patrick Ryan, 32, (He was a cattle dealer from Toomdeely Askeaton) and Maggie Madigan, 21, travelled to Cork from Askeaton together. The night prior to Titanic’s sailing, the foursome lodged at the McDonnell rooming house at The Beach in Queenstown. The Moran’s had already been living in New York and Daniel was a police officer there. They were visiting Ireland to receive an inheritance from their recently deceased father, and convinced Maggie and Patrick to come back with them. Maggie and Bertha had retired early Sunday evening, April 14, and were asleep when Titanic had her fateful brush with the iceberg off Newfoundland. Having a cabin so deep within the ship, they felt the collision much more vividly than the first and second-class passengers with accommodations on higher decks. They were actually jolted awake by the collision and roused from their sleep by the commotion in the hallway outside their cabin. Confused and frightened, Maggie and Bertha were soon joined by Daniel and Patrick who hustled them to the third class promenade area where they luckily managed to climb to the boat deck with many other steerage passengers. They had been held back by crewmen for a period of time, but eventually, the two women were ushered onto Lifeboat 15. Daniel and Patrick of course stayed aboard and their fate was sealed.

Later, Patrick Ryan’s parents would take a case against the White Starline and won. This was used as a test case for the rest of the families of the passengers of the tragic Titanic. Afterward, Maggie settled in Troy. While Bertha remained in the United States, where she later married, and eventually died on 15 April 1961 while residing in Michigan.

The story of boarding and the terrifying night would have been similar for the other Limerick passengers such as Patrick Dooley, 32, boarded the Titanic with his ticket number 370376, which cost him £7 15s. He was travelling from his home in Patrickswell. Co Limerick to New York City. Patrick was home on holidays from Chicago and is believed he was to come back after dealing with some business in Chicago. His father, Edmond, was well into his seventies when his son was drowned. A brother Richard was in New York at the time. Patrick Dooley who was a noted sportsman was originally booked to sail on another White Star liner, Cymric, but this service was withdrawn.

Patrick Lane, was a resident of Clare Street in Limerick City, He was heading to New York City He was only 16 years of age when the Titanic delivered him to the icy waters of the North Atlantic. He had been an assistant in a marine store in Limerick prior to his departure. One of his fellow Limerick passengers Nellie O’Dwyer was asked to keep an eye on him by his parents before his departure. She survived but never forgave herself for losing him. Below is the record of Patrick Lane and his family on the 1911 census.

Thomas O’Brien, 27, and his wife Hannah, 26, of Pallasgreen, Co Limerick, boarded the Titanic with the dream of a new life in New York City. Hannah survived the tragedy she disembarked Carpathia: New York City, as a widow on Thursday 18th April 1912. Sadly her time in America was also to be cut short and she passed away on Thursday 17th October 1918.

James Scanlan, 22, of Rathkeale, His destination was New York City. He was on his way to join his sister Kate Scanlon, at The Plaza New York. James was the son of John and Catherine Scanlan and brother to Kate, William, Patrick, Edward, and Cornelius. His parents made a claim against the White Star Line for £20,000 and they also received £30 from the British Titanic Relief Fund.

Patrick Colbert was born on Saturday 5th November 1887 in Kilconlea, Abbeyfeale. He worked as a porter in Limerick Train Station before leaving Limerick and his destination after crossing the Atlantic was Sherbrooke Canada.

Finally, there was Joseph Foley farm labourer, from Mountplummer, Broadford who was on his way to Larchmont, New York. Whose brother Joseph in Chicago on hearing of his death said:

“I guess he is gone,” said Foley, pulling excitedly at his pipe. “Poor lad; he was a fine, clean cut young fellow, 26, he was. The last letter I wrote I told him to stay at home on the farm with the old folks. Joe is the first to go. There were twelve of us children, eight boys and four girls. They are all in the old country except myself and Nick, who is a fireman for the Chicago and Northwestern in Chicago.”

The only Limerick woman to die in the tragedy was twenty-one-year-old Bridget Ellen O’Sullivan of Glenduff. Bridget was following her siblings who were already living in New York. She was travelling with her beau the above Joseph Foley.

It undoubtedly took years for the families who lost their loved ones to rebuild their lives, and now those whose lives were cut prematurely short in such a tragic way have earned their place in history and should be remembered as the brothers, sons, uncles and friends that they were.

Other possible Limerick victims were:

Also on board the Titanic was Mr. Maurice O’Connor from Ballinloughane, Co. Limerick, Ireland. Age: 16 years. A number websites and information points have Maurice O’Connor address as – Boherbue, Co. Cork, he may have worked in Cork, however he is a Limerick man. Maurice is my Great Gran Uncle and he was 5 years in the 1901 Census.- Gerard O’Connor

Some records show another possible Limerick victim Bridget (O) Sullivan, but it is unclear if she was actually from Limerick.

The story of Patrick Dooley has been translated into a play by David Slattery-Christy.

Email response from Patrick Dooley on the above article:

I read with interest your article on the new Titanic Faces book. One of the lost passengers mentioned was one Patrick Dooley from Limerick. When the post card he sent his cousin Mary was originally auctioned in the early 1990s, it inspired me to write a play about his departure on the Titanic and his doomed romance with Mary. The play is called The Postcard and received excellent reviews here in the UK. At the time the play was written I understood he had returned from spending time in England and that he was going to meet relatives in America. The play has just become available for professional and amateur companies to perform in this centenary year. Below are some of the reviews for your information.

Email response from Bridget Cropper on the above article:

My great great grand uncle was on the Titanic and survived he was from one of the lanes off Shaun Huston place. His name was John Frank Kennedy he joyed his brother Michael in New York and went on to join the army where he was stuck down with anthrax poisoning  from as army issued shaving Brush.