Limerick Tornado blew through the city on October 5, 1851

On the 5th October 1851 at 5:50pm, a tornado ripped through Limerick City and although it was referred to as whirlwind at the time, it was actually a T4 Tornado. The unforeseen weather only lasted a matter of minutes but the damage was extreme.  In early October 1851 the Aurora Borealis could be seen in Limerick.

It was widely reported in the local and national news at the time and prompted Dr. Daniel Griffin to write a letter to the Proceedings of the Royal Irish Academy. Below are extracts from this letter dated Limerick, November 26, 1851.

The tornado entered the city at St. John’s Hospital (Fever Hospital) and exited at Sarsfield Bridge (Wellesley Bridge). It followed a near straight line between these two points, there was little damage witnessed outside of this area.

It was so strictly limited to this line, that at a distance of 15° feet on either side of it, its effects were hardly perceptible. The people in the higher parts of George’s-street, and even at more moderate distances, had not heard of its occurrence until next morning.

It had the appearance of column of dense smoke from a distance and to those who were close too it described it as having a roaring sound, when the tornado hit the Shannon it let off a great fog but through this the keeper at the toll-house on Sarsfield Bridge could see small boats being lifted into the air. The toll-house keeper also mentioned that:

Two women who were passing over the bridge in a donkey-cart were lifted out of the cart, blown across the bridge, and one of them would have been carried over the battlement had she not held fast by one of the turned stone pillars that supported it.

There were many other strange incidences such as:

On Arthur’s-quay, the mainsail of a turf-boat, which lay over a rick of turf, black-tarred and heavy, being made of strong canvass, was lifted up, carried over the houses, and left upon the roof of a house in Denmark-street, about 150 yards off.

There were many roofs stripped of their slates and at least two stone chimneys were destroyed. There was an interesting case of the Linen Hall, whose roof was a domed shape with a model of a spinning wheel on top; although the roof itself was stripped of slates the spinning wheel remained undamaged.  Sheds were taken into the air and demolished, the wood returning to earth in pieces up to 1 foot in length entering the ground with such force they were embedded there.

There were two interesting cases of vacuums within buildings causing them to shatter windows from the inside, these were noted in the buildings of Mr. Gleeson, the ship-agent whose offices were at  the foot of a flight of stone steps, near the swivel section of Sarsfield Bridge and the other was at Mr.Hogg on Honan’s Quay.

Here there is a window about 1 2 or 14 feet wide, by 10 in height. This window was covered with shutters outside, and barred and bolted. The people were gone home ; all the doors were shut, and there was no chimney nor fire-place in the room. When the storm had passed, the window-frame was found torn from its place and the glass all shattered. But what was most singular, this was evidently effected by a force acting from within. The bolts, which could not be drawn, brought the window-frame with them six or eight inches towards the street, particularly at one end, and it was clearly by the distortion of the frame the glass was broken, as the shutters were not taken off at all — the injury was exactly what one would expect to see if a quantity of gunpowder had been exploded in the room, and had forced out the windows the weakest point. 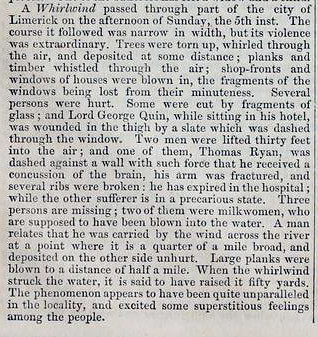 The Household Narrative from 1851 had the following report:

Lord George Quin, while sitting in his hotel, was wounded in the thigh by a slate which was dashed through the window. Two men were lifted thirty feet into the air; and one of them, Thomas Ryan, was dashed against a wall with such force that he received a concussion of the brain, his arm was fractured, and several ribs were broken: he has expired in the hospital; while the other sufferer is in a precarious state. Three persons are missing; two of them were milkwomen, who are supposed to have been blown into the water.

The Limerick  Chronicle would later report on Thomas Ryan, who died of the injuries he received at John’s Square due to the Tornado.

It is interesting to note that a provision of receiving the Old Age Pension in 1909 was whether the applicant could remember the Night of The Big Winds of 1839,  a previous wild wind which wreaked havoc on Limerick as well as Ireland. The Limerick Tornado was a mere 12 years later and there may have been cases of applicants recalling this second fluke storm and so received their pension earlier than they should have.

Limerick1913 from the Limerick City Library have created this wonderful map showing the path of the tornado from John Tyrrell report.

View The Limerick Tornado of 1851 in a larger map