Wedding in County Limerick, Ireland in 1863 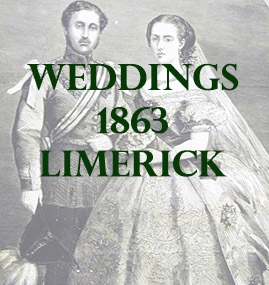 The following list contains marriages from 1863 that mention places in county Limerick, the year before the full civil marriage registrar comes into Ireland. Whether it was the marriage location, the ancestral home of the bride or the home of the groom.

January 8th, at Doon Church, by the Rev. John B. Harley, brother in law of the bride, Samuel Phillips, Esq., eldest son of the Rev John Godfrey Phillips of Beechmount, to Jane, fourth daughter of the late Newport White of Kilmoylan Esq J.P. [No cards sent]

Mr Martin Joseph Maguire of this city (Limerick) to Maria second daughter of Captain McCarthy, late of the 9th Regt, and now of the United States Army

In this city (Limerick) on the 30th ult, Ignatius S. Kelly Esq., of the Provincial Bank, Cork to Teresa, daughter of the late Wm. B. Massey, Esq.

On the 16th inst., at St Michael’s R.C. Church. Mr Patrick Gleeson to Miss Ann Bourke of Queen Street in this city (Limerick)

On the 18th inst., at Adare by the Rev Mr O’Grady, P.P. Mr. Patrick Moloney of Nenagh to Margaret, daughter of Mr Michael Cregan

On the 9th inst., at St. Andrew’s Church, Dublin, John F. Sheehy, Esq., of Court, in this county (Limerick) to Margaret, eldest daughter of the late Bernard Mulrenan, Esq., of this city

On the 16th instant, at the Parish Church, Croagh, county Limerick, by the Rev. Abraham Issac, brother-in-law of the bride. Augustus Frederick Turner, Esq., Staff Army, to Isabella Sarah, youngest daughter of the Re. Wm. Archer, M.A., Rector of the above parish and Prebendary of Croagh. [no cards]

On Thursday 16th inst., by special license, at Abington House, the residence of the bride’s mother, Margaret, only daughter of the late Michael Apjohn Esq., to John Connell, third son of the late Francis Connell Fitzgerald, Esq., of this city (Limerick)

On yesterday, at the New Cathedral, in this city, by the Rev. W .Molony, P.P., Edward Mancur, Esq., Doddington Grove Newington, London, to Alice Mary, eldest daughter of the late John Callanane, Esq., of Cahirnarry, in this county.

On the 27th inst., at the Roman Catholic Church, Marlborough Street, Dublin, by the Rev C. O’Reilly, R.C.C., of Killasnet, Kilmore, Manorhamilton, Mr Jeremiah O’Rourke of Limerick to Mary Teresa, daughter of Mr John Welsh, of George Street of this city (Limerick) [No cards sent]

On the 8th inst., at Loughill Church, in this county, by the Rev. Edward Gurdon, Rector of Barnham-Broom, and Vicar of Kimberley, in the county of Norfolk, assisted by the Rev. Robert Gabbett, Vicar of Shanagolden, Edward Wm. O’Brien, Esq., of Cahirmoyle, eldest son of W.S. O’Brien, Esq., to Mary, second daughter of the Hon. Mr. and Mrs. Spring Rice.

Sept. 26th at the Parish Church off St. Michael, by the Rev. Henry Peacock, David Williams, Esq., of Kilrush, to Lavinia, daughter of John Adams, Esq., of this city (Limerick) [No cards sent]

On the 14th at St. Michael’s Church in this city (Limerick) by the Rev Joseph F. Robbins, Rector of Castletownarra, Tipperary, Mr. Theobald Taaffe Taylor, Kilrush to Rachel, youngest daughter of the late Mr. Wm Simmons, Ballymacurtane both in the county of Clare

On the 13th inst., at the Lower Shandon, Cork, by the Rev. G.B.Grant, Thomas Prosser of Brooklands Esq., county Limerick, to Eunise Teresa, eldest daughter of the late George Hopkins Esq., M.D. of the H.E.I. co.

At Castlemahon Church on the 13th instant, by the Rev Luke Hanrahan P.P. assisted by the Rev R. Power, Ellen only daughter of Michael Sheehan Esq of Ballinakill to James, second son of Daniel Cagney, Esq., Croom

On the 25th instant at Rathmines R.C. Church Dublin by the Rev M Collier, Michael Egan Esq., of Patrick street in this city (Limerick) to Anna Frances, only daughter of Michael Ryan, Esq., Clare Cottage Athlunkard.

On the 5th inst., at the Friends’ Meeting-house, Cecil street, Elizabeth, second daughter of Samuel Alexander, to William Hayward, of London.

This morning at Ennis by the Very Rev Dean Kenny P.P. V.G., Laurence Quinlivan, Esq., J.P. of Limerick to Margrette, daughter of Michael Cullinan Esq., of Ennis, solicitor [No cards]

At St. Mary’s Church, Donnybrook, Philip Kerney, Esq., to Annie, daughter of the late Christopher Knight, of the city of Limerick