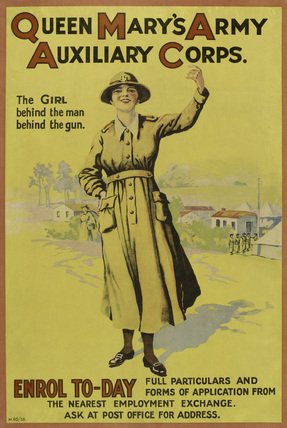 On 4 August 1914, Britain declared war on Germany, and with this the armies of men left to fight, leaving behind their women and children. By 1917 the number of men remaining available to serve was drastically reduced, and so women were recruited for service with the Army in a non-nursing capacity for the first time in British history.

It was in this regiment that many Limerick women would serve, showing a lot of courage and grit along with determination. Below is the history of some Limerick women who died while serving in the QMAAC during the First World War.

Mary Agnes McMahon, known as Agnes, was born on 21 May 1895 at 7 Lady’s Lane and was the middle child of Michael McMahon and Mary McMahon née Dwyer’s five children. In 1911 Agnes was working in Cleeves Condensed Milk Factory, while her father and brothers were railway servants. The family moved around Limerick in 1901: they were living in Lady’s Lane, in 1911 in Lee’s Lane and by 1918 in 14 Prospect, Rosbrien.

Agnes would have seen her brothers heading off to war and on seeing the posters calling women too Agnes packed up her bags and headed to the Officer’s Cadet School in Kildare. She served with Queen Mary’s Army Auxiliary Corps under the service number 18691. She was ranked as a volunteer when she died, aged 22, on the 27 October 1918 at 14 Ellen Street Limerick. She was buried in Mount St Lawrence Cemetery on the 29th October 1918.

Mary Eva Wallace, born in 1899, was the daughter of W. Wallace, who in 1919 lived at 4 Roches Street, Limerick. Mary was a Volunteer member of the QMAAC, and her service number was 17526. On the 14th March 1919, at 20 years of age, she died in Dublin. Her remains were removed to Mount St. Lawrence Cemetery for burial on the 16th March 1919. She is also mentioned on the Grangegorman Memorial in Dublin.

Mary Emily Daly nee O’Keeffe aged 35, a Volunteer member of the QMAAC, died 5 June 1919 in the National Hospital, Hammersmith, London. She was the daughter of John and Anne O’Keeffe who lived on Summerville Terrace, South Circular Road. She was buried with her family in Mount St. Lawrence Cemetery on 7th June 1919. Her service number was : 21783

Elizabeth B. Cochrane, was born in Limerick in 1872. She was a stewardess on board the Mercantile Marine ship the S.S. South Western. On 16 March 1918, the ship was sunk following an attack by an enemy submarine nine miles off St Catherine’s Point, Isle of Wight, UK. the English Channel United Kingdom. Elizabeth was drowned. She was born in Limerick, Ireland. She is commemorated at Tower Hill Memorial, London.