Below is the tale of 9 Limerick women and a baby’s escape from Limerick Gaol (Prison) on Sunday night, the 23 May 1830.

Nine female convicts, all under sentence of seven years’ transportation, and for whose removal to Cork an order was hourly expected, succeeded in effecting their escape from the city gaol. They had been locked up at the usual hour, in the ward allotted for their reception, and their escape was not discovered before the next morning. The names of the nine convicts are Mary King, Mary Hurley, Mary Kevin and her infant about eleven months old, Ellen Hurley, Margaret Shaughnessy, Margaret Clanchy, Bridget Shelton, Mary Hickey, and Catherine Welsh.

A rigid inquiry was immediately instituted by the Sheriffs, when the following facts were elucidated, and principally on the evidence of two or three prisoners. The nine convicts had been for some days before secretly provided with a file and aquafortis, also a short iron bar or poker, in order to facilitate their liberation. 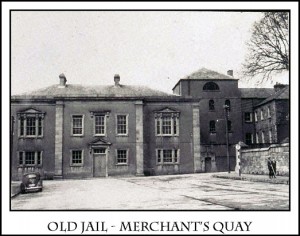 Two men from the outside scaled the prison walls, between nine and ten o’clock on Sunday night; and by means of a ladder used by workmen in repairs of the gaol, gained an easy access to the women’s ward. This object was accomplished without much difficulty, as, singular to say, the exterior of the gaol is shrouded in solitary darkness, no lamp being hung out as a beacon to keeper or watchman, and the passage after nightfall is seldom trodden by human footsteps. Now came the trial of ingenuity, for the locks of a range of cells were to be forced, and the inmates enlarged, without disturbing the few persons in charge of the prison, or breaking that lonely silence which hung over the building.

The prisoners frequently indulged in singing after night- fall; this amusement they enjoyed with more than ordinary spirit on this occasion, and without exciting any particular notice. Meantime the iron fastenings were assailed by the burglars with extraordinary success; the continued knocking was heard in the adjacent ward, but the sound of their operations was so drowned in the melody of the accompanying voices as not to reach the ears of the gaol governor or his assistants. The locks gave way before repeated efforts, and nine females, with an infant, were extricated from durance vile.

This was a grand object at the outset; but the work was yet incomplete, and after a brief consultation, the ladder was again in request. One after the other rapidly mounted the wall which confines the ward, and sat perched in a row on the summit, while the ladder was being drawn over and laid down against the other side, by which they descended in perfect silence. They traversed a short yard, where the same feat was accomplished at the second barrier, and with equal success.

The third and outer wall was carried by a similar coup de main without the slightest accident, and the eleven persons made their escape into the street, unnoticed by any of the persons on watch. The consternation of the gaoler, turnkeys, and keepers next morning it is easier to imagine than describe. The sheriffs and police have been incessantly on the alert through every part of the city and liberties, and one of the nine convicts, Mary Hickey, was apprehended in the Abbey.

This capture may probably lead to the detection of others, who, it is believed, have not fled away, but are concealed by some of their friends in town. The most extraordinary feature in this daring and successful enterprise is the breaking of the great iron locks and bolts on the cell doors; it absolutely puzzles every officer of the prison how these could have been possibly forced without that application of violence which must have roused, by its noise, the most dormant and inattentive person within the prison.

A few days later, Catherine Welsh was apprehended. The Limerick Chronicle of 9 June 1830 tells of her arrest.

Catherine Welsh, a sixth of the convicts who broke from the City Gaol, is taken at Gort, where the Police arrested her on charge of shoplifting. A warrant was being made out for her committal to Galway gaol, when she with much sang froid told them there was no occasion for sending her so far into the heart of Connaught, when she was one of the prisioners who had escaped from Limerick gaol. This unexpected avowal immediately altered her route to this city, she is now fast locked in her old habitation.