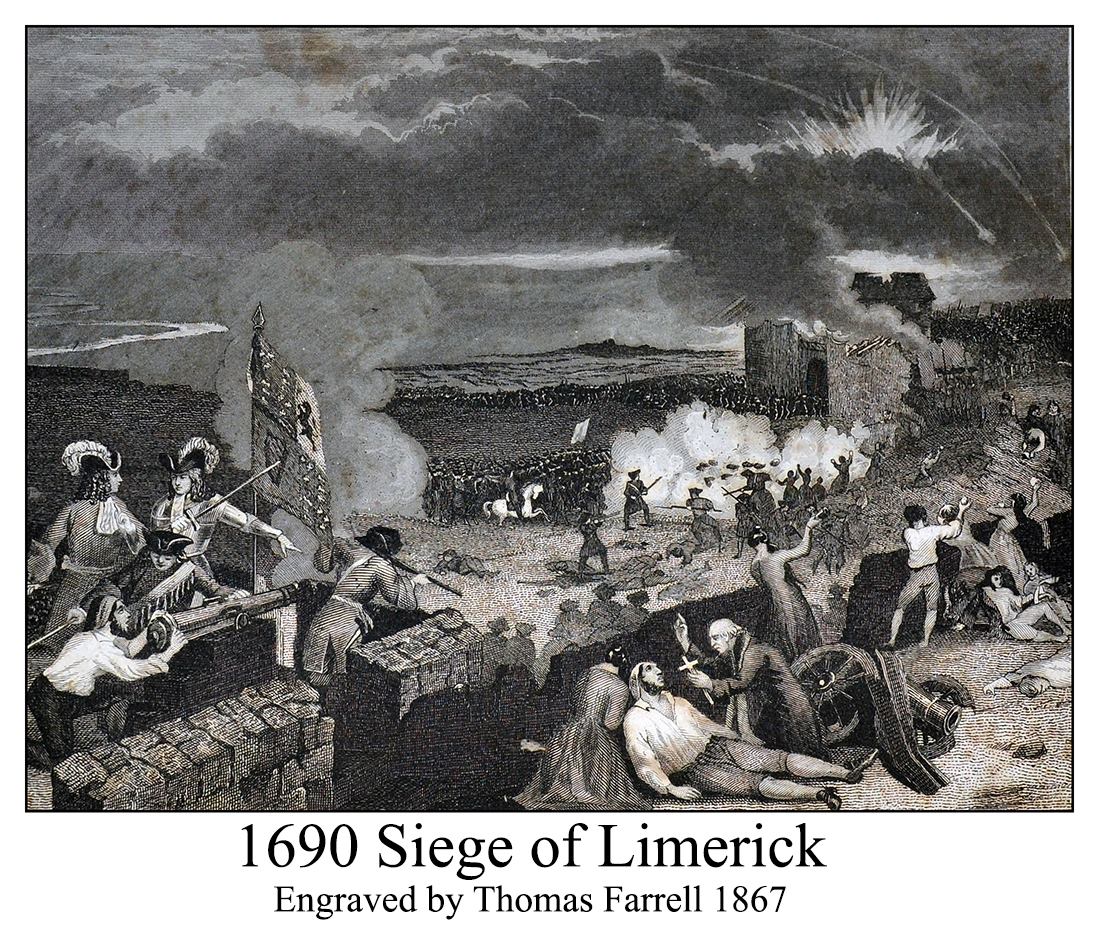 In this Guest Post Liam O’Brien regales us his wonderful poem on based on the momentous events surrounding the successful Jacobite defence of Limerick on the 27th of August 1690 when the city was besieged by a multinational army led by William of Orange.

Though fortune cheats the truest heart,
Of many earthly gains,
The truest heart will find it’s peace
and break those earthly chains.

At brave and battered Limerick on that fateful August day,
When William’s grim faced gunners had finally cleared the way.
Within the walls a frenzy rose among King James’s men,
And vow they did to make a stand and thrust them out again!

“They’re through, they’re through!” a Captain cried, “the blackguards! They are here!”
With that he drew his sword and cried “For Ireland! We Stand Here!!”.
And then the Dutch and Brandenburgs came pouring through the breach,
And grenadiers with fiery eyes and furious foreign speech.

A trooper in the rearguard under Talbot’s sure command,
Sat waiting on his charger with a trembling in his hand.
He watched the fighting flourish, that mighty, monstrous fray,
With blood and death and hatred ebbing, flowing by the way.

His thoughts turned to his true love dear so far away from him,
At Versailles with the ladies fair and safely with her Kin.
He ponders on her beauty, her sparkling eyes so blue,
A silent tear drifts down his cheek, he whispers “It’s for you”.

For he had made a promise to his lover true that day,
Upon the dock he swore his heart before she sailed away.
He said that he’d be prudent in the midst of steel and lead,
And when this war was over then the sweethearts soon would wed.

But then he hears the order echo o’er the cannon’s roar,
“Come on my boys, let’s drive these strangers from our Shannon shore!”.
With that the ranks moved forward, hooves blazing through the street,
And like a thunderclap they rode, their “visitors” to greet!

They first clashed with Prince George’s men and scattered them pell mell,
And like a wave upon the shore they pummelled them to hell!
The trooper’s hand was keen and swift while slashing left and right,
His sabre bathed in crimson dew still thirsting for the fight.

But in that smoky, muddled place our trooper’s luck turned sour,
He rode ahead without a care up towards that blackened tower.
The earth did heave in front of him, a thousand men blown up,
By Johnsgate way the miners work had reaped a bloody crop.

He landed near a rampart strewn, he lay there on his back,
He tried to say his sweetheart’s name but gave a bloody bark.
He hoped and prayed she’d be alright while all around him blurs.
With senses dulling, dreaming, of his lips pressed to hers.

At brave, emboldened Limerick on that glorious August day,
When William’s battered legions finally broke and fled away.
Our hero closed his eyes at last and peaceful was his face,
His last thoughts of his lady dear and of the ancient race.

The walls of Limerick are still standing,
It’s defence we must begin.
Not only ‘gainst the foes outside,
But also the foes within.