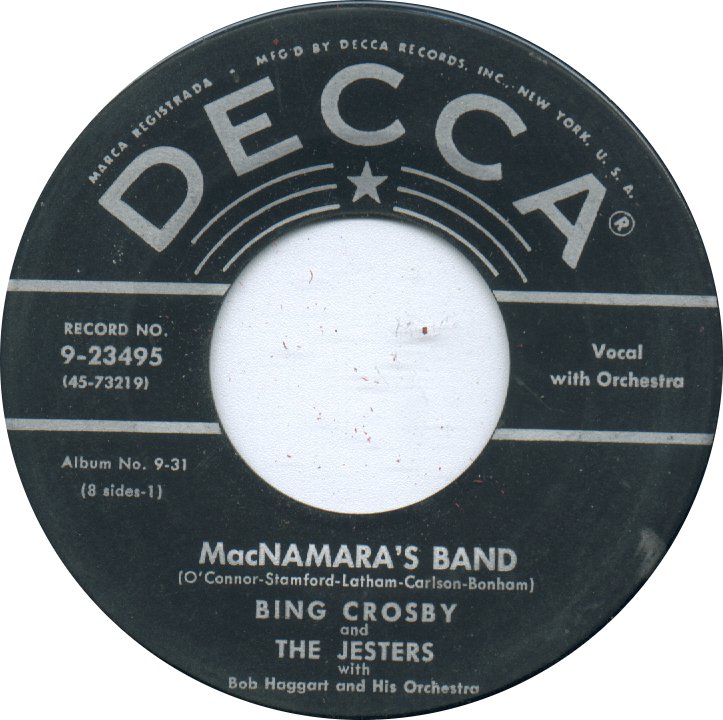 The History of McNamara’s Band

My name is McNamara, I’m the Leader of the Band,

And tho’ we’re small in number we’re the best in all the land.

Oh! I am the Conductor, and we often have to play

With all the best musicianers you hear about to-day.

There are few who are not familiar with the well know musical composition, McNamara’s Band. But how many know the world-wide celebrated musical ensemble got its name from four Limerick Brothers: Patrick, John, Michael and Thomas, all of who were born in the latter part of the last century in Meat Market Place, Old Thomas Street, off Athlunkard Street.

All four brothers played in one row with St. Mary’s Band. Michael, a Boer War veteran, was an instructor and sergeant in the Royal Munster Fusiliers. He retired with the rank of Regimental Sergeant Major, and died in Devon, England in 1962.

John was a member of the 2nd Battalion, Royal Munster Fusiliers and was also attached to a regimental band. He previously had served in the South African Campaign and re-enlisted in August 1914, at the outbreak of World War I. On 9th May 1915, he was killed in action, at the Battle of Aubers Ridge in France; on that day, 139 members of the 2nd Battalion Royal Munster Fusiliers, including 30 Limerick men, were also killed. After the battle, none of the bodies were recovered; they are commemorated on the Le Touret` Memorial, Pas de Calais, France.

John was posthumously awarded the 1914 – 15 Star, the Victory Medal and the British War Medal.

On 18th July 1965, Thomas McNamara – the last of the quartet – paid his second and final visit in 64 years to the spot where he was born and reared. In May 1978, he passed to his eternal reward, the last member of the McNamara brother combination that had won the All-Ireland Championship in 1895.

Of Patrick, musician and composer, it could be said that there were few who could claim to be his peer, with the honourable exception of his good friend and neighbour, Patsy Salmon of Church Street.

Patrick was the bandmaster on the occasion of the 1895 championship. In 1905, when he emigrated to the United States, he carried with him this great musical tradition, where his band continued to be known as “McNamara’s Band.” Reunited with his brother Thomas, who arrived in the States in 1901, the combination soon caught the imagination of a great songwriter and so, the famous ballad was born. Thomas returned home just before the out-break of World War I and joined the British Army; after the war he returned to America. Thomas was one of a group who helped to smuggle Eamon de Valera out of Ireland to the United States during the troubled days of 1920

In latter years, the McNamara Trio cut many records for Voralion Records: Thomas on the piccolo, Patrick on violin and Patrick’s daughter, Eileen on the piano. In 1921, The Aeolian Co. cut a number of other recordings.
The death of Thomas McNamara in 1978 ended the world-renowned saga of McNamara’s Band. Those who gave it the name and the musical life had all gone to their eternal reward. 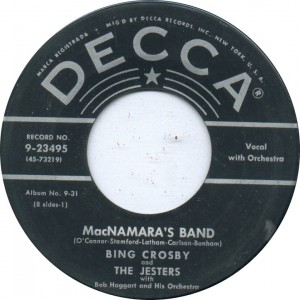