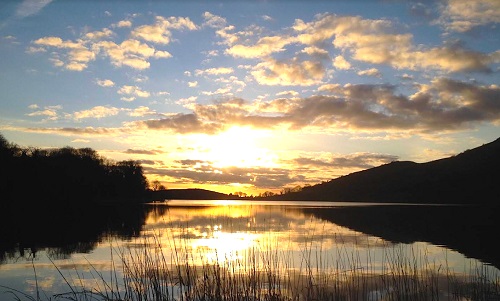 The following story and poem comes courtesy of Liam O’Brien.

Lieutenant. Colonel Galloway was a retired British army officer who had served during the First World War. He and his wife moved to Ireland in the 1930s, purchasing a house and land on the banks of Lough Gur in Co. Limerick.

I am told that Galloway and his wife got on generally well with the local populace and their household and land was a source of employment for many during their time there.

In the late 1940s a teenage boy out hunting rabbits on the Galloway’s estate had a close encounter with the landowner. I know this tale to be true as the boy in the story is my Father, Willie O’Brien who lived at the time at the family home in nearby Holycross.

Here’s a poem which is my interpretation of the story from that encounter:

One brisk and bracing morning

the Colonel feels the chill;

Puts on his cap and great coat

in the big house by the hill.

He walks outside and calls his dog

with blackthorn clutched in hand;

Then on he goes to greet the day

and oversee the land.

Through frosted fields by walls of stone

he marches o’er the hill;

As marching was his only way

since he first learned to drill.

For though his war was over

and the Kaiser vanquished be;

The army way was his cliché

’twas plain for all to see.

Then through the gorse he spies a lad

crouched low beside a ditch;

He swiftly moves to view what’s up

and see who’s on the mitch.

“Hello there, boy”, he bellows out

the lad stays calm and still;

For he too spied the Colonel brash

when he climbed o’er the hill.

“And how are you today?”

While hoping that his recent catch

would never be displayed.

The Colonel twirled his neat moustache

This charming boy had stuck a chord

with manners mild and pleasing.

“Young rascal, now be on your way”

the old man said and grinned;

And walked away but never saw

the rabbits snared and skinned!

The Colonel left, his tract secured

and nothing more to do;

Oblivious to the fact that he

had met his Waterloo!