Who was Matthew Thornton? Signatory of the Declaration of Independence

It is repeatedly noted in secondary sources that Matthew Thornton was born in Limerick in 1714 to James Thornton and Elizabeth Malone, primary sources during this period in Ireland are extremely rare. The Thornton family in Limerick were descended from George Thornton, who was granted land at Dunnaman, Limerick near Adare by the court of Elizabeth I for his 20 years of service for “sea causes”.

On August 5, 1718 the Thornton family including a young Matthew left Limerick, Ireland and landed in Maine in mid-winter. The passengers of the ship had no place to live, so they remained aboard until spring when they travelled to Wiscasset. The Wiscasset area was located in the Massachusetts territory that is now the state of Maine. 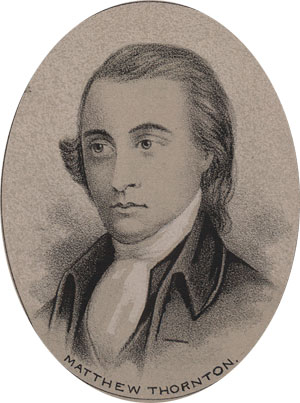 On July 11, 1722 the community was attacked by Native Americans. At this time, James and Elizabeth Thornton fled from their burning home with Matthew, moving shortly afterwards to Worcester, Massachusetts.

It is a common misconception that Matthew Thornton was born in Londonderry, Northern Ireland, but he actually set up his first medical practice in another Londonderry located in New Hampshire, in 1740.

In 1745, Matthew Thornton travelled with the New Hampshire militia in the successful seizure of Fort Louisbourg, in what is now Nova Scotia, from the French. Thornton’s success as a physician allowed him to purchase significant land holdings in Londonderry, New Hampshire and he established himself among the political elite of the community, serving as Justice of the Peace and a member of the Provincial Assembly. On 7 November 1754 his father, James Thornton, died at age 70 and was laid to rest at the Forest Hills cemetery, in East Derry, New Hampshire.

In 1758, Matthew was elected to the New Hampshire Legislature, representing his home of Londonderry. Two years later, after remaining a bachelor until the age 46, he married 18 year old fellow Presbyterian Hannah Jack. The couple had five children called: James, Andrew, Mary, Hannah, and Matthew.

In 1771, he was appointed as a Judge. In early 1775, he was elected to the New Hampshire Provincial Congress, where after a speech denouncing England’s policies towards America, he won an election as the first president of the Provincial Assembly and chairman of the Committee of Safety. This all during a time when relations between Britain and its American colonies were quickly deteriorating.

On 4 July 1776, Congress officially adopted the Declaration of Independence, and as a result the date is celebrated as Independence Day. Nearly a month would go by, however, before the actual signing of the document took place. First, New York’s delegates did not officially give their support until July 9 because their home assembly had not yet authorized them to vote in favour of independence. Next, it took two weeks for the Declaration to be “engrossed”, or written on parchment in a clear hand.

In September of 1776, Matthew was elected to the second Continental Congress. Because he did not arrive in Philadelphia until September, he missed the debates and initial approval of the Declaration of Independence, but on November 4, 1776 he added his signature to the document as a New Hampshire delegate, which was the same day he arrived in Philadelphia to take his seat. He was one of the last of the 56 men to sign the document.

After serving in Congress for about a year, he returned to New Hampshire, where he worked as a judge until his late sixties, and served in the state legislature until he was nearly 75. In 1779, he moved to Exeter, New Hampshire where he served the new state in the Assembly and Senate. Ten years later, Dr. Matthew Thornton then retired to his farm in Merrimack, New Hampshire, where he wrote political articles for the newspapers. In his later years he operated a ferry at Thornton’s Ferry. From 1784 to 1787 Thornton was a member of the New Hampshire State Senate and combined this with the role of State Councillor from 1785 to 1786.

His wife Hannah died on 5 December 1786 aged only 44 years. Matthew died while visiting his daughter in Newburyport, Massachusetts on 24 June 1803 aged of 89.