McAdam the Traitor, who betrayed the Irish. 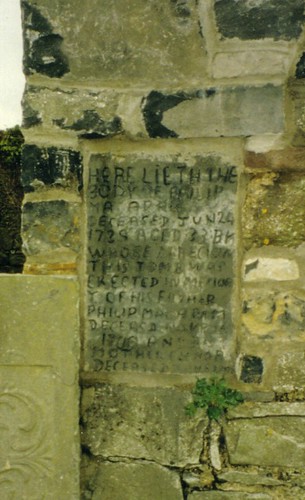 Headstone of McAdam in Kilquane

McAdam as the legend goes, during the 1690 siege of Limerick, when the Williamites were nearing the Shannon in Corbally, Philip McAdam, who was supposedly employed as a fisherman, had a plot to destroy the Irish defenses by leading the enemy to the only safe place to cross the Shannon.

McAdam “feigned sickness” and remained behind at the banks of the Shannon as the other fishermen on “fearing” the “cruelty of Williams soldiers”, had fled to Clare or to the woods in Cratloe. The Williamite army seeking the advantage of a suitable fording point at which to cross the Shannon, one of the cities natural defences, approached McAdam with an offer.

One account states that he was “handsomely rewarded for his treachery” against the Irish by receiving “a large tract of land in the vicinity” from the Williamites. While an alternative version of the tale sees McAdam in a more favourable light, in which he was forced into a decision to either show the Williamites the crossing point on the Shannon and receive “a keg of gold” or in refusal to face “a block and headsman’s axe”.

On choosing the former, he directed the enemy to the place known as Annaghbeg in Corbally, which was located opposite Plassey Mill about two miles up from the city. At Annaghbeg there was a ford which until recently had been marked with “two short rows of rocks running parallel to the river bank”. Consequently, the Williamite troops crossed the Shannon at Annaghbeg and went on to sack the city.

When Philip McAdam died he was buried in his family grave in Kilquane churchyard in Parteen. The Abbey fishermen, who felt such vengeance against the man, had a shelter close to the church grounds in which they would rest and eat. On stopping at this particular shelter they felt it their duty to visit the grave of McAdam to spit on it and in other ways vandalize it. This grave was ritually desecrated for over two centuries until at least 1918 by the families of the fishermen who felt betrayed by McAdam.

The following poems were recited in relation to the betrayal the fisher folk felt towards McAdam:

Here lies the body of McAdam the Traitor,Who lived a fisherman, and died a deceiver,

The devil came for him in flashes of thunder,
And now he is in hell and it is no wonder.
Here lies the grave of McAdam the traitor,
Who’s burning in hell with the thirst,
And anyone who don’t desecrate his grave,
I pray that their belly burst.

One source claims that the community of Abbey Fishermen would take an annual pilgrimage of sorts to the headstone bearing his name, in which they would spit, throw stones, and dance on his grave. This ritual that I have already stated continued until at least 1918. The first two lines of poem number one were etched into his tombstone, at sometime between 1839 (when there was no mention of the inscription in the recording made by John O’Donovan, the Antiquities of County Clare) and 1866 when it was recorded by Maurice Lenihan in his History of Limerick.

This inscription shows the ferocity with which this man was despised by the community involved. As “disrespect for the dead was not prominent” during the ninetieth and early twentieth centuries, in normal circumstances for Irish society and even less so in predominantly catholic communities the likes of which the fishermen belonged to, hence this man must have been extremely alienated from his society to warrant such an attack.

The historical truth of this story is that the Williamite army did in fact cross the Shannon at Annaghbeg on the morning of 10 August 1690 without “opposition”. On the previous night of the 9 August 1690, a troop was sent to view the ford at Annaghbeg where the “enemy being thus posted so very advantageously that we expected to have met with great difficulties and opposition in passing the River, which is very Rapid, and the bottom stony, but the Enemy in the middle of the Night abandoned their Station with great precipitation”. I have found no reference to a man by the name of McAdam in any of the sources written at the time of the siege and quoted in the Old Limerick Journal 1690 Siege Edition.

Major Thomas Stannard McAdam a descendant of McAdam was asked about the tale and the receipt of the land by Maurice Lenihan during his compilation of his book on the history of Limerick. The Major produced papers to prove that his ancestors had rented the estate from the earl of Thomond long before the siege.

Another variation of this tale is that it was not in fact a Philip McAdam or an incident surrounding the siege of Limerick which the Abbey fishermen refer to when speaking of the traitor or desecrating the McAdam grave but another man by the name of Thomas McAdam of Blackwater Co Clare. This man was a possible descendant of the accused Philip McAdam, as both he and Philip’s actual descendant Thomas Stannard resided in Blackwater, Co. Clare.

Thomas was a leaser of the Lax weir between 1818 and 1834. On one occasion during this period, on catching poachers on the weir, he shot one of them, a fisherman named John Hartigan in the eye. This lead to Hartigan’s death a few months later. This may have seen as just cause to vandalize the McAdam grave. Although it is also possible that it was both men of the McAdam clan at whom the stories, poems and despoliation were aimed.

In conclusion the tale of McAdam the Traitor of Limerick, although, not necessarily historically accurate, played a pivotal role in the social structure of this fishing community and was a vital element in keeping the community together albeit by fear of the consequences of going against convention.

The legends of this man, which was maintained through generations through the use of folklore alone, was adapted as it went, but never losing the basic moral of the story which was ingrained in the tale. Therefore, no matter the teller or the method by which it was told, the moral to this story remained the same: Do not betray your community or eternal damnation will be yours.