Michael Fitzpatrick versus Ellen French, a native of Limerick, in Australia 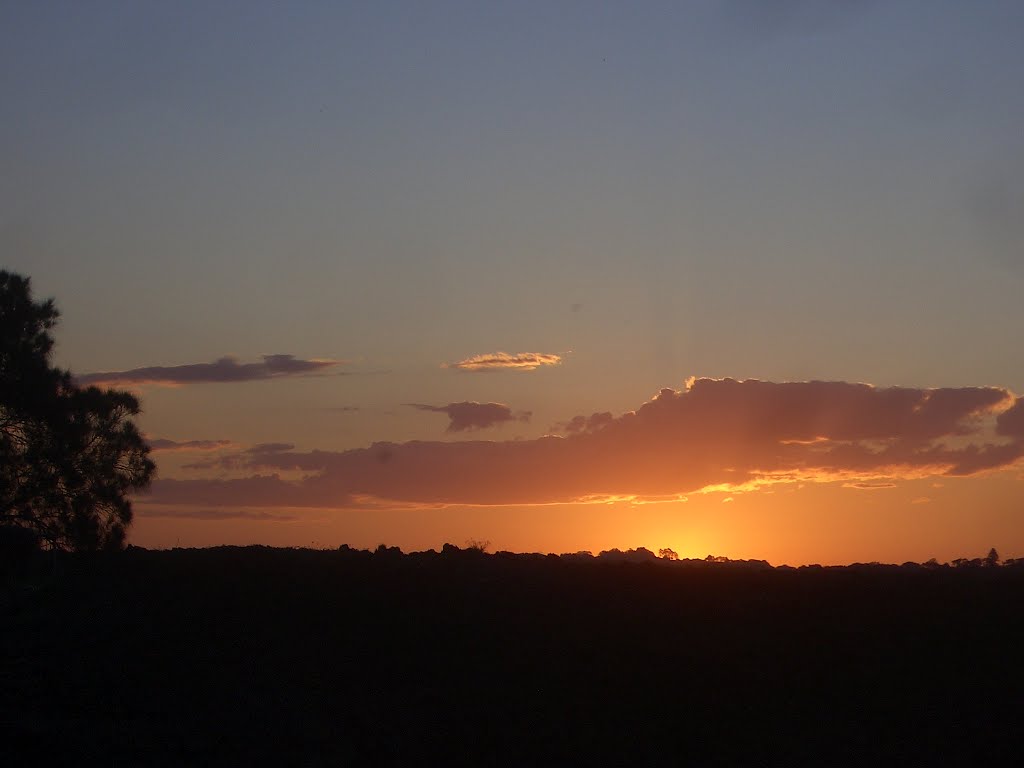 The following Guest post comes all the way from Australia, where John & Pam Walton discovered a gruesome trial in their family history. Their relative Ellen O’Halloran was the victim in this case and was a native of Limerick.

THE RAPE OF ELLEN FRENCH NEE O’HALLORAN AN IMMIGRANT FROM LIMERICK TO SYDNEY.

Ellen together with her sisters Mary and Bridget were assisted immigrants who arrived into Sydney Harbour on 24 September, 1854 on board the ship “China”.
Ellen married John French at St. Mary’s Cathedral Sydney on 2nd April 1855.
The rape on Ellen French was committed in January 1870 whilst her husband John French was in goal for two and a half years for perjury. (Arrest report: 19 Jan 1970, New South Wales Police Gazette)

The Goulburn Chronicle newspaper reported the following in their issue dated 6 April 1870.

TUESDAY, APRIL 5. His Honor took his seat on the bench at ten o’clock. RAPE AT ROBERT’S CREEK. Michael Fitzpatrick was charged with having, on the 8th January, at Roberts’ Creek, committed a rape upon Ellen French. Prisoner pleaded not guilty, and was defended by Mr. Davis; attorney, Mr. Gannon. The Crown-prosecutor stated the case to the jury, and called Michael Colgin, who deposed: I am a constable stationed at Murrumburrah; I have known the prisoner about five months; I saw the prisoner on the 8th January; on that day I went to Mrs. French’s place and found the prisoner there sitting on a sheet of bark; Mrs. French was there and some of her children; the oldest child was about nine years old; I asked the woman what was the matter, and she said the man had ill-used her, beaten her, and committed a rape upon her; she said the children could prove it; I then arrested the prisoner on that charge; he said, “all right; do your duty; I am not guilty of committing the rape; the prisoner said he was not guilty; the little boy said, “you are a liar you did do it;” I then took the prisoner to the lookup; prisoner had the appearance of being drunk; the woman had some blood on her face, and her nose was swollen; I received information of the offence from someone passing by, but declined to mention his name; the prisoner had two bottles of grog in his swag; Mrs. French appeared to be intoxicated.

To Mr. Davis: The prisoner and Mrs. French appeared to be drunk; I went to French’s place between five and six; prisoner would not get on the horse to go to the lockup unless I took the handcuffs off him; prisoner and Mrs. French were not conversing when I went up; it was about half an hour after I received the information that I arrived at Mrs. French’s gunyah ( a bark type humpie.); I have known Mrs. French for the last two years and a half; I believe she was in the habit of drinking, but I never saw her drunk.

Ellen French deposed: I am the wife of John French; my husband is a stockman; I have seven children; the oldest will be thirteen next Christmas; in January last I was living at Murrumburrah Creek; my husband was in the lockup at Young; the oldest child that was with me then was eleven years; the little boy was nine; I was camped in a gunyah about a mile and a half from Murrumburrah; I never saw the prisoner until the 8th of January; prisoner came to the gunyah about the middle of the day; prisoner came up on horseback; he bid me the time of day, and asked me for a drink of water; he then took some grog off his saddle; he asked me to drink with him; I refused, as he was a stranger to me; he drank some himself; he again tried to make me drink, but I said I would not drink and told him to be gone; he then commenced to pull me about and tore my dress; I struggled with him before and after he knocked me down; the nearest house was a mile and a half from mine; I struggled with the prisoner for fully half an hour; [the witness, who was much affected, here described the commission of the offence ;] he said while I was down that he would cut my b-y throat unless he got the better of me; prisoner said he would serve my little girl the same as he had served me; I sent my little girl away for a policeman; I was very much bruised about the legs and face; Dr. Temple subsequently examined me in the hospital; when the policeman came up I told him what the prisoner had done; I did not hear what the prisoner said to the constable ; I was in the hospital for some time; I caught the prisoner by the arms and hair and tried to kick him; I pulled his beard and resisted in every possible way; all that he did to me was without my consent.

‘To Mr. Davis: Prisoner was with me better than two hours; my eldest girl went to the creek for some water to give the prisoner a drink; I struggled with for about ten minutes before he knocked me down; at the hospital where I was examined by the magistrate I did not say that the prisoner threatened to cut my throat unless he got the better of me nor that he said he would serve my girl the same as he had served me; I was not in liquor; I did see a gentleman pass by, but my little boy; I was sitting down near the gunyah door when the policeman came up, the prisoner was a little intoxicated when he came up to the gunyah; my little girls were present while the offence was committed and they cried. I did not hear the prisoner tell the children to go away; prisoner’s horse was feeding about the gunyah during the transaction; I had met with an accident some few days previous and cut my leg; I don’t remembering saying that prisoner did not beat me on the face; I never said that my face was not bloody when the policeman came; I have occasionally suffered from want of memory, but this does not last long; I suffered this way at times for nearly five years ; it is the result of a sun-stroke.

To the crown-prosecutor: I was sick in the hospital when the police-magistrate examined me; I was also examined by a legal gentleman at consider able length; I can neither road or write; it was not the same girl who brought the water that went for the policeman; prisoner dragged me about for some time. Kate French (thirteen years old), examined by Mr. Davis, the crown-prosecutor, and his Honor as to her belief and the nature of an oath, deposed: I don’t know what would be done to me if I told a lie; mother taught me the Lord’s prayer I have repeated now; I don’t know whether I shall be punished in the next world if I tell lies here; I told the magistrate that I should go to hell if I told a lie; I say now if I tell a lie I shall go to hell and if I am a good girl I shall go to heaven; mother never told me about a book called a bible; I was taught the prayer before I went to the police office.

The witness was then sworn, and deposed: I recollect a man coming to our place some time ago; the man in the dock is the same; he got off his horse and lit his pipe and asked my mother to drink with him; mother said she would not as he was a stranger to her; my mother put the cup to her mouth, but did not drink it; prisoner asked for a drink, and Johnny went for a can of water, and he had a drink, and then threw the can down; he then went to my mother and whispered to her, and she said ” be off, you blackguard, what do you want here ?” he then knocked my mother down and beat her on the head and face; I also heard him say to mother, “I will cut your throat; ” I went away to some neighbours, and was away when the police took the prisoner; there was blood all about mother’s face and lips; I saw her catch the prisoner by the beard and hit him twice; he had my mother down when I went away for the police.

To Mr. Davis: It was before dinner this occurred; we had no dinner while the man was there; I think I said the offence was committed inside the skillion; the man knocked my mother down and beat her; I don’t know what a skillion is; there was no skillion near the gunyah; the prisoner and my mother had a smoke together before the affair took place; I am sure my mother did not take much rum; while prisoner had mother down she was kicking and screaming. To the Crown-prosecutor: When I was at the police court several men asked me questions; there were three sheets of bark on either side of the gunyah; I think I have been in this box about two hours.

The Rev.William Robson deposed: I am a Wesleyan minister; on the 8th January I was riding from Young to Murrumburrah; I have seen Mrs. French on one or two occasions; while passing her gunyah I saw a little boy coming towards me; in consequence of what he told me I went to Murrumburrah and told the police; this was about five o’clock.

Charles Temple deposed: I am a duly qualified medical practitioner; I examined Mrs. French on January 14th last; she had a black eye and bruises on her face; there was a bruise on her side and thigh as large as the palm of a hand; there was a bruise on her chin as if she had had a fall; when I first saw her she seemed to be suffering from aberration of the mind, and appeared to be in a reverie; while in the hospital she seemed to wander.

Constable Coglin re-called and examined by Mr. Manning: The gunyah was two hundred yards from the mail road; the little boy was not examined at the police-court, as it was thought he was not competent to take an oath; there is a back road along which Mr. Robson came. This closed the case for the crown. Mr. Davis addressed the jury in defense of the prisoner, dwelling upon the discrepancies in the evidence, and said that the child was not a competent witness to convict a man oven of stealing a pocket handkerchief, much less to consign a follow-man to the gallows. He urged upon the jury the necessity of calmly weighing the evidence, and if there was a doubt to give the prisoner the benefit of that doubt.

The Crown-prosecutor replied at some length, combatting the objections raised by prisoner’s counsel. His Honor went carefully over the evidence, and laid down the law applicable to the ease before the jury. The jury retired at a quarter-past two, and re turned into court at a quarter to eight o’clock without having agreed. The foreman said there was no likelihood of their agreeing. They wore then locked up for the night.