Limerick was the host to many strange and unusual performances. One of these included the record breaking attempt by “Musical Marie” who in the 1950s was the world’s “only non-stop lady marathon pianist”. From 9 am in Monday 1st November to 1 am on the 8th November 1953, she played for 134 hours non-stop in the Catholic Institute on Sarsfield Street. A ticket to see her cost an adult £1 and children 6 pence and opening hours for the public was between 9 am and midnight, while police and press were in attendance at all other times. 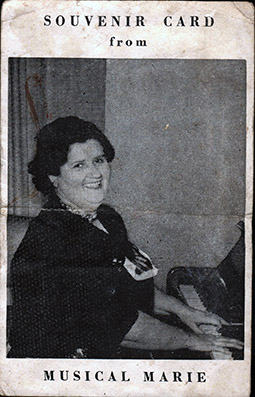 Marie was aged 40 and originally from Manchester, she had beat a previously held German record in Limerick by two hours. The last tune she played was the National Anthem, she was then assisted from her stool to the couch by members of the St John’s Ambulance before being removed to her Cruises by ambulance.  Over three thousand people were on the street outside as she finished her set.

A few days earlier in Dublin the male record was set at 204 hours by James Strickland also known as “Syncopating Sandy”. 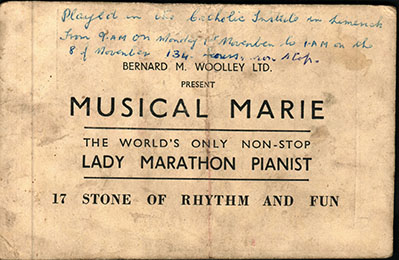 In January of the following year the Limerick Steamship Company and Philip J Murray of Cork brought claims against Limerick Corporation for damages caused to their car during Musical Marie performance. As the crowds grew outside the Catholic Institute and Cruises Hotel a number of men climbed on cars to get a better view. The cars owned by the Limerick Steamship Company claimed  £115-17-4d work of damage, including the caving in of its roof. This case was dismissed though another for £58 was awarded.

In 1954 Musical Marie played in London and this was recorded by British Pathe.