The position of Royal Navy Purser came about in the fourteenth century, the Purser was responsible for the handling of money on board ship. They were responsible for purchasing supplies such as food and drink, clothing, bedding, candles. They were also responsible for maintaining and sailing the ships and were the standing officers of the navy, staying with the ships in port between voyages as caretakers supervising repairs and refitting.
On modern-day passenger ships, the purser has evolved into a multi-person office that handles general administration, fees and charges, currency exchange, and any other money-related needs of the passengers and crew. The Chief Purser often holds a rank equivalent to that of the Chief Officer (and wears the same three rank rings).

Limerick had at least two important Pursers born in the county, Walter Burke and Christopher Rice. 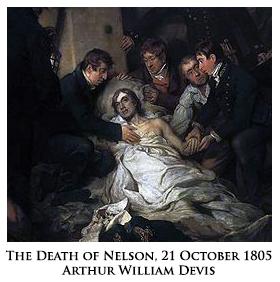 Burke is to the right of Nelson, supporting his pillow. He is wearing a brown coat and red waistcoat.

Walter Burke was born in Limerick in 1736, he enlisted in the navy to join another member of his family. He was the eldest member of the crew on board the HMS Victory from 18 April 1804 to 15 January 1806.

In 1805 he was serving as the Purser on board the Victory when Horatio Nelson was mortally wounded at the battle of Trafalgar. Walter was present at the death of Nelson and was immortalised in a painting of Nelsons last moments. When he retired from the navy he went to live in Wouldham, Rochester, where his houses became tourist attractions and ‘Burke House’. He passed away on the 12 September 1815 aged 79 years and is buried in Wouldham Church’s graveyard, where his headstone reads:

Walter Burke had at least three sons who died while serving in the navy:

1. Henry Burke, rose to the rank of commander and captained the 16-gun brig-sloop HMS Seagull from June 1802. In August 1803 he retook the East Indiaman Lord Nelson, which had been captured by the privateer Bellone several days previously. Henry Burke, and a younger brother, were lost with the rest of Seagull’s complement when she disappeared at sea in the English Channel in February 1805.

2. Walter Burke, rose to the rank of lieutenant. He was mortally wounded during the boarding the French ship Chevrette in July 1801, and died in hospital.

3. Unknown Burke, disappeared with his brother Henry Burke in 1805.

Christopher Carlton Rice – Purser in the Navy of the United States.

Christopher Carlton Rice, a native of Limerick rose to be a well respected member of the New York society and a Purser in the United States Navy. In 15 October 1832 he became a Naturalised Citizen of the United States of America.

In 1834 Christopher Carlton Rice ran as a Democrat in the borough of New York, his pledge was to oppose monopolies in the state prison service, banking and insurance and to oppose the planned repeal law abolishment imprisonment for those found guilty of debt.

In 1839 he was president of the “Irish Emigrant Relief Association” which had come under public scrutiny that year as two of its members were using the name to collect funds and not donating them to the cause. Christopher Rice quickly relieved them of duty and published their names in the Fulton Newspaper, New York.

His death was recorded as the 5th March  1846 in the Barbar Newspaper, New York and the Officers of the Continental and U.S. Navy and Marine Corps, 1775-1900 . The following is his obituary recorded in the Limerick Reporter in 1846.

Death of an Exile. – On the 6th of March, in New York, Christopher Rice, Esq. a purser in the navy of the United States, and a native of Limerick, who always loved Ireland, and especially this, his native city, with the unfortunate attachment of an Irish heart. The New York papers state that his funeral was the largest known in that city for the last thirty years, and was attended by the marines, naval officers, and crews of the United States vessels in port. All naval honours were bestowed on him. Four lieutenants of the navy formed half of the pall-bearers, and the commodore of the port, with all the officers of the navy yard of Brooklyn, also attended. His remains were interned in the burial ground attached to St. Patrick’s Cathedral.