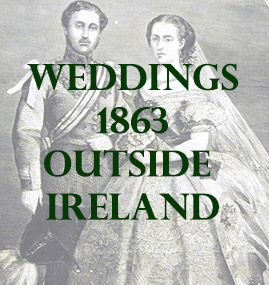 The following list contains marriages that mention places Outside Ireland.

Mr Martin Joseph Maguire of this city (Limerick) to Maria second daughter of Captain McCarthy, late of the 9th Regt, and now of the United States Army

On yesterday, at the New Cathedral, in this city, by the Rev. W .Molony, P.P., Edward Mancur, Esq., Doddington Grove Newington, London, to Alice Mary, eldest daughter of the late John Callanane, Esq., of Cahirnarry, in this county.

At the Parish Church of Whitechurch, county Cork, Charles Garfit Esq., of Wincham, Cheshire to Catherine daughter of the Rev Stephen Gwynne Rector of Agherton

On the 8th inst., at Loughill Church, in this county, by the Rev. Edward Gurdon, Rector of Barnham-Broom, and Vicar of Kimberley, in the county of Norfolk, assisted by the Rev. Robert Gabbett, Vicar of Shanagolden, Edward Wm. O’Brien, Esq., of Cahirmoyle, eldest son of W.S. O’Brien, Esq., to Mary, second daughter of the Hon. Mr. and Mrs. Spring Rice.

On the 5th inst., at the Friends’ Meeting-house, Cecil street, Elizabeth, second daughter of Samuel Alexander, to William Hayward, of London.