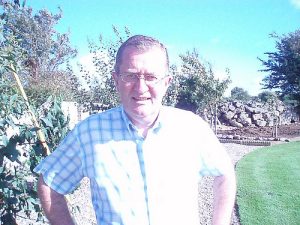 Paddy Cronin is set to release his memoirs “Home wasn’t built in a day” in Askeaton by Dr. Pat Wallace, Director of the National Museum of Ireland on Saturday November 10th at 8pm at Cois Sionna Credit Union Askeaton. He intend to have it on sale Nationwide.

His previous publications include:

Paddy can be contacted at limerickmemoir@eircom.net in relation to his books.

Home Wasn’t Built in a Day

Growing up in County Limerick

Recollections of a Rural Irish Childhood 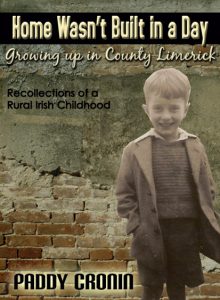 Growing up in the 1950’s and 60’s rural Ireland was sometimes tough, but whatever depths we sank to, there was always someone or something that managed to salvage our sanity. Life was uncompromising with very little support outside the family unit. With the enforced absence of my father through the curse of emigration and his untimely death, my mother, a strong and deeply religious woman was forever steadfast, always there to ensure we survived. If we got through today, tomorrow would always be better and in the face of adversity, somehow my mother always won out. She was a Pious woman, but so were a lot of people back then; God was all we had and the Catholic Church played a big part in our daily lives.

We were lucky that most people had a sense of humour; without which we were doomed. There were many characters, who with their innate sense of humour made life and day to day living exciting to say the least. There were storytellers and story makers, with tales of pishogs and superstition making sure that times were never dull. Television in the ’60’s awakened a new desire in us. We all wanted to be like those people in the box in the corner and the determination to better ourselves drove us on. The Dancehalls or Ballrooms of Romance as they were then known, were our social outlets, and finding a suitable wife was always top of the agenda.

With the influx of multinational industries in the ’70’s, prosperity was finally on the horizon. Rural Ireland had become a better place to live and the bad old days of the ’50’s and ’60’s had finally been extinguished. A new era of Irish life had begun.

This is a fascinating and entertaining story but it is more than that. It is an exploration of shelter and starkness, belonging and growing. Many of the characters honoured in this tale are more colourful and frequently more humorous than anything available on TV in multi-channel Celtic Tiger Ireland.Paddy skilfully shares the laughter, mystery, challenges and joys of a precious place called home.

Anyone who ever grew up in Askeaton or its neighbourhood couldn’t but be awed by the great antiquity of the place and the sheer quality of its medieval buildings. Its distinctive topographical nature has always been more than matched by the characters who have inhabited it. Paddy Cronin’s Memoir is a welcome and accessible introduction to many of those we knew and affectionately remember. It is also a reminder of how dignity and humour were so much part of an era, which though hard and often bleak, was less hurried and at least allowed time for reflection and the telling of good yarns. I commend Paddy for his efforts and wish his Memoir every success.

This is a story which evokes many emotions; it is funny and sad but above all it captures a side of Ireland that is now almost forgotten. Limerick will always hold a special place in my heart, and Paddy, whom I have known since my time in the Treaty City, vividly documents the changing face of rural Ireland.

There is huge interest in true stories from the 50’s and 60’s in Ireland. It was the bridge period between poverty and prosperity. Paddy Cronin’s personal account brings history alive through humour, story telling and most of all the many marvellous characters he introduces.