Peruke Makers of the 18th Century

Perukes were a smaller version of the Periwig. Periwigs are the hairpiece which resulted in the word wig being in our vocabulary. These were usually powdered and gathered at the back of the neck with a ribbon. Perukes and Periwigs were expensive to produce. The best examples were made from natural human hair. Though hair of horses and goats was often used as a cheaper alternative. By the late 1700s, men were pouring a starch-based powder over their wigs to make them as white as possible. Perukes were informal (smaller) wigs was used for travelling, riding, and everyday wear. After 1735 the great curled periwig was no longer considered fashionable, and was mostly replaced by the smaller less cumbersome Peruke. 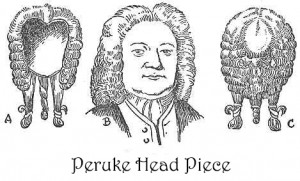 Periwigs came into being in the early 17th century, as a result of King Louis XIII of France and his male pattern baldness. This baldness would have cast aspersions on his virility as a result he had the most elaborate headpiece created. Before long, his unconventional style became a fashion statement in the royal court, with most of the king’s men adopting the elaborate hairpieces, whether they were bald or not.

This fashion statement quickly spread across Europe’s fashionable set, this included Limerick. This led to the creation of a wig-making industry. Early wigs were severely crimped and inducing the hair to curl must have been a time-consuming occupation for all concerned with the trade. In order to achieve a semi-permanent kink in preparation for wig-making, the locks were wound on to small pipe-clay curlers – known as ‘pipes’ – secured with rags, boiled, and finally baked in the oven. The fitter would need barbering skills as the head had to be close-shorn or shaven under the wig to ensure comfort and a good fit, while the barber’s important de-lousing skills became even more essential. 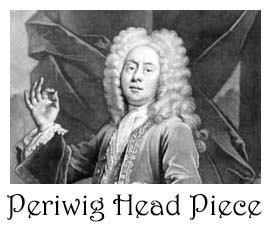 The Five Orders of Periwig is a 1761 engraving by William Hogarth. It contains several levels of satire. It lampoons the fashion for outlandish wigs in the mid to late 18th century.

Advertisement from 1749 Munster Journal, with thanks to Limerick 1814