Who was Peter Woulfe – The Last Alchemist

Noted Limerick historian John Ferrar wrote in his History of Limerick 1787 that Peter Woulfe was born about 1727 at ‘Tirecullane’, near Limerick City. ‘Tirecullane’ has not been located on a map of Limerick, nor has a birth record for Peter Woulfe in Limerick. However, it is possible that this was in the Corbally area, with his father or grandfather possibly being a Robert Woulfe a Catholic merchant in Limerick.

{Update: October 13, 2018 – Tiermaclane is located in County Clare six miles south of Ennis. Many thanks to Joseph Woulfe a relation of Peter Woulfe for this information and a link to this page on the Woulfe family in Clare}

Herbert also stated that when Woulfe was 15 he moved to his brother in Madrid (The brother of Robert Woulfe had been living in Madrid after fleeing Limerick as part of the flight of the Wild Geese after the 1691 Treaty of Limerick).

On the recommendation of the renowned Limerick doctor Sylvester O’Halloran (also a Catholic), Woulfe then moved to Paris where he trained under the French chemist Guillaume François Rouelle (1703 – 1770).

In 1752 he was working in London, followed by an appointment to the role of Surgeon General at Guadaloupe.  He spent time in Germany and France exploring mines before returning to Cornwall in 1766, he examined and exploited the tin deposits there. According to Philip Joseph Hartog, Woulfe wintered in London and summered in Paris, writing for both British and French scientific journals. In 1771 his work Experiments to Shew the Nature of Aurum Mosaicum was published in Philosophical Transactions 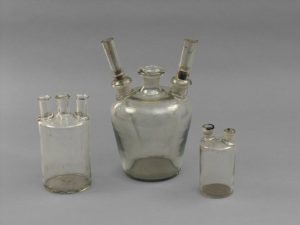 He is credited with inventing the Woulfe Bottle, a kind of wash bottle with two or three necks however the apparatus has been traced back to J. R. Glauber, and its attribution to Woulfe seems to stem from his use of a vessel with two outlets in a series of distillation experiments described in 1767. That same year he was invited into the Royal Society when he was described as a ‘Gentleman well skilled in Natural Philosophy and particularly Chymistry’.

In his later life, he became fascinated with alchemy and became extremely eccentric so much so that he was mentioned in the”Curiosities of London” a book of London Eccentrics published in 1860. Sir Humphry Davy (1778-1829), chemist and inventor stated that Woulfe would ‘affix written prayers and recommendations of his processes to the Providence’.

It was said in Manchester Courier and Lancashire General Advertiser 24 August 1839 that Peter Woulfe was ‘so slovenly, and his rooms so extensive and so filled with furnaces, that it was difficult to reach his fireplace. Mr. Brand mentions, that a friend (Dr. Babington) of his once put down his hat and never could find it again; such was the confusion of his boxes and parcels’. It was also stated in the Kentish Independent 16 June 1860 that Woulfe would only allow visitors into his room if they used a secret knock. When he had a falling out with a friend or acquaintance he would send them a present ‘consisting of an expensive chemical or preparation’ and would never see them again.

Woulfe would not attend a doctor, instead relied on a return trip to Edinburgh to cure his ills. It was during one of these trips that he returned with a cold which cause be his ultimate demise. This expedition was reported repeatedly in British newspapers up to sixty years following his death. He died in Barnard’s Inn, Holborn, London in March 1803.  The Morning Chronicle 07 June 1803 carried an advert:

By Leigh, Sotheby and Son, This and 6 following days, (Sunday excepted,) at 12 o’clock, the entire and valuable library of the late Peter Woulfe, Esq. of Bernard’s Inn, Professor of chemistry, author of several philosophical papers, &c. &c. consisting of a very good collection of voyages, travels, history, chemistry, arts and sciences, belles letters, &c., &c. To be viewed, and catalogues had at the place of sale.