To Pew or Not to Pew

On last Friday night some persons entered Knockea chapel through a window, proceeded to the gallery, cut away the seat and footrail of the pew of a parishioner named Michael Ryan, and removed the disjointed retortions to the yard. It is supposed that the object of the outrage was to get over the difficulties arising out of the desertion of the gallery by the owners of the other pews, and the threatened closing of the chapel by the order of the Bishop of Limerick, the Most Rev. Dr. O’Dwyer. As will be remembered, the congregation some time ago left the church when Ryan, who is accused of grabbing a farm at Ballyaeety from which the Widow Clune had been evicted, entered the building. On the following Sunday the Very Rev. Dr. Moloney, V.G., Limerick] attended Mass at Knockea, and announced the intention of the Bishop to discontinue the celebration of divine worship in the chapel if what occurred were repeated. On the following Sunday the people did not leave although Ryan was present, but the owners” of the pews in the gallery did not occupy, nor have they since, their respective seats.

It was this circumstance that induced the further instructions of the Bishop. On Sunday week Father Halpin, the parish priest, requested that the gallery would be occupied by the owners of the pews, and stated that in the event of disobedience the chapel would be closed. This warning not having the desired effect, it was expected that the threatened older of the Bishop would be carried out to-day. Hence the outrage on Friday night, which, instead of attaining the object in view viz., enabling the owners of the pews to occupy their old places in the absence of Ryan, who would not presumably be allowed to make use of a pew not his own, has only complicated matters still more, and rendered it almost useless to hope fox a satisfactory solution of the difficulty. 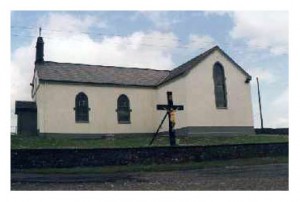 At the early Mass at Knockea Chapel on last Sunday morning, the Rev. Father Halpin announced with deep regret that in consequence of the disobedience of the people in not occupying their accustomed seats in the gallery, because a parishioner objectionable to them had a pew there, the church was, by order of the Bishop, to be closed from that day forward, neither Mass nor any other religious ceremony being performed. He denounced the sacrilegious outrage perpetrated in the church on Friday night, and explained the nature of the Bishop’s order respecting the closing of the chapel, which will be duly stated in the report. At the Mass celebrated at hall-past eleven o’clock, Ryan, as usual, attended and took his place in the pew, in which he had to stand or kneel, as there was no seat or footrail. Contrary to the supposed calculation of the party or parties who committed the outrage, he was the sole occupant of the gallery. A sergeant of police from the Drombauna Station and half-a- dozen constables hung about the chapel yard, while as many more attended Mass.

After the last Gospel, Father Crotty addressed the congregation. He said it was his very painful duty to announce to them that from Sunday forward the church would be closed. They would have no Mass, and how long that would be so he was not in a position to tell. They got warning of what would be done, and he regretted to say they did not abide by that warning. There would be no Sacraments administered in the parish, with the exception of Baptism and Extreme Unction but children to be baptised must be taken to Donoughmore. Neither would there be confessions or the usual classes, and in the case of death the priests would not be allowed to attend at the grave. It was also with feelings of regret he had to tell them of the sacrilege committed in the church. He would be sorry to say he suspected any person in the parish of having committed it. It was, however, a frightful thing, and a sacrilegious thing, for any person to eater the house of God as had been done and the person who did it, the anger and the wrath of God would’ attend him. After Mass, Ryan left the church and walked home two constables being a short distance behind, but there was no demonstration of any kind.

The Dublin Freeman of June 22 says The sacrilege which has led to the enforcement of these extreme measures is condemned by all respectable people in the parish, who ascribe the outrage to some rash and inconsiderate youths. Even those who are strongest in their opposition to Ryan condemn the occurrence, and point to the fact that since the boycotting of Ryan commenced ho has never bees in any way molested or interfered with by the people who are enforcing the boycott against him, The police authorities are still endeavouring to discover the perpetrators of the sacrilege. At a meeting of the Knockea National League, the sacrilege was strongly denounced. The following resolution was adopted Resolved That we have heard with horror and alarm of the gross outrage which has been committed during the past week, when the church was entered and a seat broken, and we believe that the disgraceful act is the work of the enemy of the people and the cause, and we hereby offer a reward of £10 for such information as will lead to the conviction of the perpetrators.”

The Bishop of Limerick, Dr. O’Dwyer, has addressed a long letter to Father Halpin, parish priest of Knockea, with reference to the closing of the church and the interdict which he has laid on the parish. The Bishop says be could not permit God’s house to be made a theatre for fighting out quarrels over land, or other secular matters, at the instance of irreligious combinations. The bishop concludes by expressing the hope that the people, who appeared to be terrorised, would return to their duty.