Pope Pius IX and the fire on St Mary’s Cathedral

On the 3 June 1877, a strange spectacle lit up the night sky in the city. Reports from the night suggest the light was witnessed as far away as Glin (Glin is approximately 55km or 35 miles by road from Limerick city). The light emanated from St Mary’s Cathedral, where some persons took barrels of tar to the top of the tower and set them alight. This was supposedly done to mark the thirtieth anniversary as his reign of Pope Pius IX.

Unsurprisingly the staff of the Protestant Cathedral of St Mary’s knew nothing of this until they were alerted to the sight along with the rest of the city. The Freeman’s Journal states that:

two Catholic young men – baudouges, most likely – carried the barrels to the top of the tower in the twilight, before the sexton had locked up, and waiting there till night, they placed them on the parapet, and having applied the match, slid down on the outside by a rope.

Sir, On Sunday evening last, between the hours of nine and ten, one of the Roman Catholic clergymen of|St. Mary’s parish, Limerick, accompanied by two men and three women, asked and obtained permission from the verger of St. Mary’s Cathedral to ascend the tower for the purpose, as was stated by the priest, of seeing from it the city illuminations in honour of the Pope. These six persons, attended by the verger, ascended the tower as far as the ringing loft. Here one of the’ women, on the plea of nervousness, declined to proceed higher, and the verger was prevailed on to remain with her while the other five continued their ascent.

After a short interval they rejoined the verger, and their nervous friend and all descended together. The verger, having shown the party out of the cathedral, had his attention called to a blaze on the top of the tower. On this he as speedily as possible rushed up the winding stairs and found four zinc buckets, filled with paper and tar lighting in three of them on the battlements. The buckets, with their contents, must have been conveyed to where they were placed under the garments of the females.

I refrain from commenting on the above facts; they speak: for themselves. – Yours faithfully, Thomas Bunbury, Dean of Limerick. June 4th. 1877. 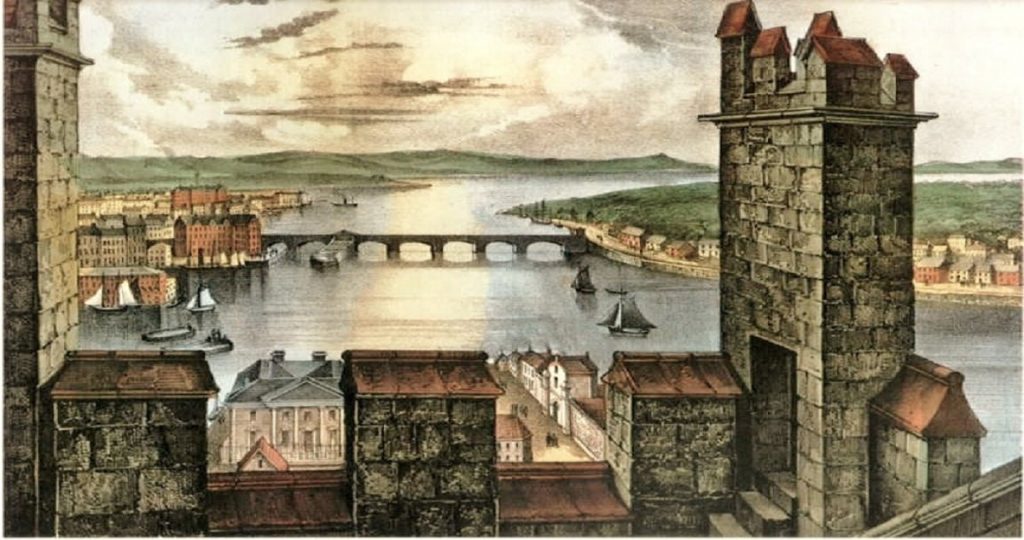 The view from the tower of St Mary’s Cathedral in the Nineteenth Century.

Pope Pius IX died the following year. Pope Pius IX, born Giovanni Maria Mastai-Ferretti, was head of the Catholic Church from 16 June 1846 to his death in 1878. He was the longest-reigning elected pope in the history of the Catholic Church, serving for over 31 years. Many Limerick men joined Pope Pius IX’s Irish Papal Brigade in the summer of 1860. This was a small army of approximately 1000 Irish men who fought for the pope against Risorgimento, the Italian unification movement. They were nicknamed the Battalion of St Patrick. Many of the Irish troops after the Papal War went on to fight in the American Civil War.