The first Presbyterian Church in Limerick, off Glentworth Street 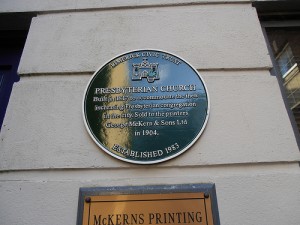 Plaque erected at the site of Presbyterian Church

The first Presbyterian Church in Limerick was built in 1817 to accommodate the increasing Presbyterian congregation in the city is hidden away down a little alley and is very difficult to photograph.

“We insert an advertisement from the Rev. Mr. Pinkerton, the excellent and amiable Minister of the Presbyterian Church in this City, offering a reward for the discovery of some unknown ruffians who have been in the habit of breaking the windows of that Church. This is an offence that calls for the vigilant exertions of every well-regulated member of society to put down – and we accordingly anticipate the exertions of the Magistrates and Ministers of all religious to co-operate with Mr Pinkerton in discovering the offenders, that they may be dealt with, so as to prevent a repetition of such a shameful outrage.”

The second Presbyterian Church was erected on the corner of Henry Street and Lower Mallow Street in 1901.

The original Presbyterian Church was sold to the printers George McKern and Sons Ltd. in 1904 who remain there to this day.