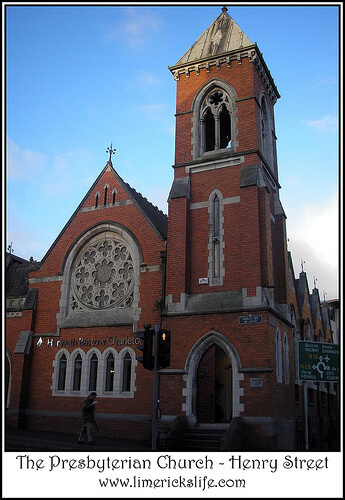 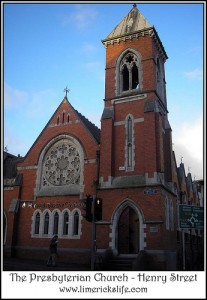 The Limerick Chronicle of June 29, 1901 wrote of the Presbyterian Church organ :

“The very prettily designed building in Lower Mallow-street, rapidly approaching completion, contains a small but excellent organ just finished, which is the subject of this brief article. That which renders the instrument unique, amongst the organs of Limerick, is the remarkable peculiarity of its construction and the very ingenious disposal of its several parts to suit the requirements of the building in which it stands. Such disposal involved the expenditure of much mechanical ingenuity, and the surmounting of many difficulties on the part of the designer, and builder, Mr Whitehead, of Waterford, and the authorities of the Church may fairly be congratulated on the fact of having committed the work to the hands of that gentleman.

The organ consists of two manuals and pedals, all of the full compass of modern requirements. There are ten stops on the manual and a Bourdon, quick-speaking and excellent on the pedals. I may as well say here, that the stopped wood pipes of the instrument are remarkably well made, where-ever found, and the voicing, tone and scale of every individual stop indicates the most careful and conscientious workmanship. The organ is distributed amongst two ornamental brackets fixed in the wall, right and left of a semicircular apse at one end of the church, while the keyboards, stops, couplers, and pedals are contained in an elegantly designed console on the floor, in the centre of the apse.”

This building is no longer in religious use, the community merged with the Methodist community and relocated their church to Christ Church on O’Connell Street in the early 1970s.

It is the second church in Limerick known as the sinking church, this was mainly due to the perspective of the church which appears to fall away from the road.

After the parishioners moved to the new church on O’Connell Street this building went onto the public marked and is now used as an office space.