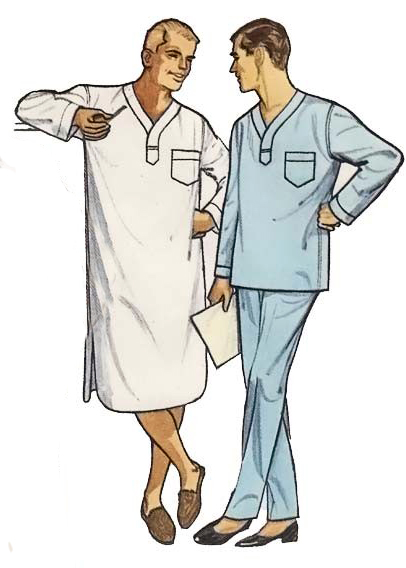 There has been a lot of controversy about pyjama wearers in Limerick over the years. But little did we realise that this debate has been going on for over 50 years – to such a degree that it caused a minor riot in St. Camillus Hospital in 1951. The debate reached as far away as Brisbane, Australia where it was reported the Charleville Times.

So, what team are you on? Team Pyjama or Team Nightshirt?

News report from The Charleville Times 10 May 1951

In the male ward of the poor house hospital of Limerick, Ireland, an old inmate neatly clad in pyjamas and slippers jeered at the shiny shanks of another inmate, who shuffled by in a flowing, sloppy nightshirt.

Fists flew and other patients joined in the fight. Age, infirmity and threats by nurses to stop the old men’s tobacco allowance ended the brawl before anyone was hurt. But the point at issue was deep-rooted among the patients.

Three days later there was another scuffle between the pyjama-wearers and the nightshirters. The Limerick City Council; stepped in, and after a long discussion, decided to hold an inquiry into the long standing problem: Are pyjamas better than, nightshirts?

Trouble brewed in the poor house hospital — maintained jointly by the Limerick County Board and the Limerick City Council—because half the inmates got pyjamas (favoured by the County Board), while the other half got nightshirts (being wards of the city).

The pyjama-clad paupers looked down their noses at city nightshirters who, in turn, scoffed at the “old men with pot bellies in fancy sleeping pants.”

The council has asked city hospital manager, Matthew Macken, to make a week’s investigation into the cost and respective merits of the two forms of nightwear. All inmates will have to wear whichever Macken recommends.

Reporters asked Macken which, he expected to favour. “Pyjamas! Nightshirts! What next?” snorted Macken. “They should see what I go to bed in!”