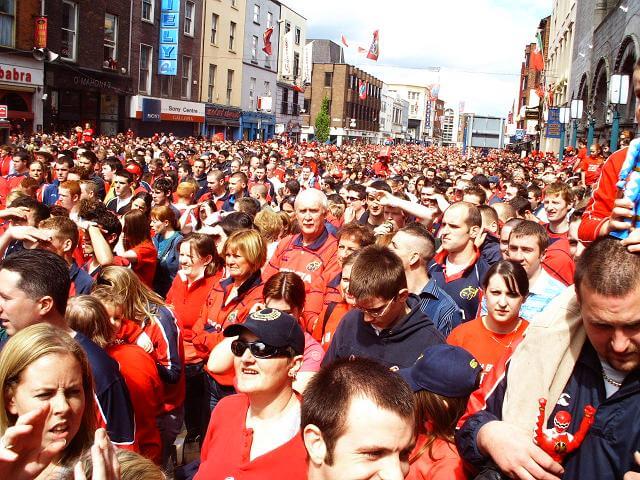 Rugby : Munster Team and its homecoming:

To write anything about this Munster Team and its homecoming is almost an impossible feat to do it justice.

Sheets of rain! One very long downpour that lasted all day. Still, we stood shoulder to shoulder, soaked to the skin, by the majestic Shannon. Shoulder to shoulder Treaty Stone et all. A red flag hung appropriately from Limerick Castle, reading “The Red Army”. And there, almost like a mirage, majestically appeared three mounted police men fronting the open-top coach with the European Cup held high. Along the side of the castle and proudly faced the historic Thomond Bridge. It seemed a common thread of years gone by with today’s hero’s – our very own Munster Team. Medieval to Millennium – Proud Munster!! Team & Supporters Men, Women and Children of Proud Munster. Proudly, they marched over Thomond bridge – Mighty Munster on the move!

The heritage of “There is an Isle” soaked us to our skin as much as did the rain. Thank God for the rain! Thank God, lest others see   us macho men with tears on our cheeks. They marched over Thomond Bridge to the waiting crowds converged by the Treaty Stone, and cheers rang out. A pause by the stone and our hero’s, Foley, O’Connell, Dowling, Stringer, O’Callaghan and all the rest beamed the glee of approval at the crowds of supporters – it was as though the bus was lifted shoulder-high as we galvanised behind it and followed it on down Clancy’s Strand. Befitting the depth of core pride we all had in our city and this exceptional band of men, came a deep purring which became deeper and louder as the moments slipped by – out of the pouring rain high in the sky overhead the open to coach – there was the Munster Flag holding aloft the Sikorsky Search & Rescue helicopter and pulling it through the air over the crowds. It seemed to seek a place to rest, but there was no such room with the swell of pride that emanated from the ground up. It passed a second time as Limerick & Bunratty Search & Rescue patrolled the river. We all knew, there and then, there will never be a moment again the same as this. As Nelson Mandela put it in his inaugural speech – We serve nobody by being small – Limerick – Rugby – World Class – Spiritual (Ask the Augustinians or the Franciscans) from Thomond Bridge to Sarsfield bridge to Henry Street to O’Connell Street by the Grace of God we are at home, European Champions! Home to the Spirit of Rugby that is Limerick. WE ARE HUGE and there is more to come. The mighty rower’s of Shannon and Limerick boat clubs befittingly saluted The Munster Team and Supporters as it made its way into raptures of singing and applause into Limerick City Centre. Champions of Europe, home at last. The raptures of singing and applause will ring out throughout history. This was a feeling of where the immortal met the mortal. Where our heavily forefathers smiled on us gleefully. It is ok to die now. It now belongs to our children and those that come behind us, to continue with this great tradition – roll on Mighty Munster!!! The journey has just begun……….

On the 20 May 2006, Limerick came to a standstill as Munster were in the final of the Heineken Rugby Cup. In the run-up to the match, Limerick city was awash with red, the colour of the Munster Team. That day a large screen was erected on O’Connell Street and hundreds of supporters turned out in their reds to cheer on the team and watch the match.