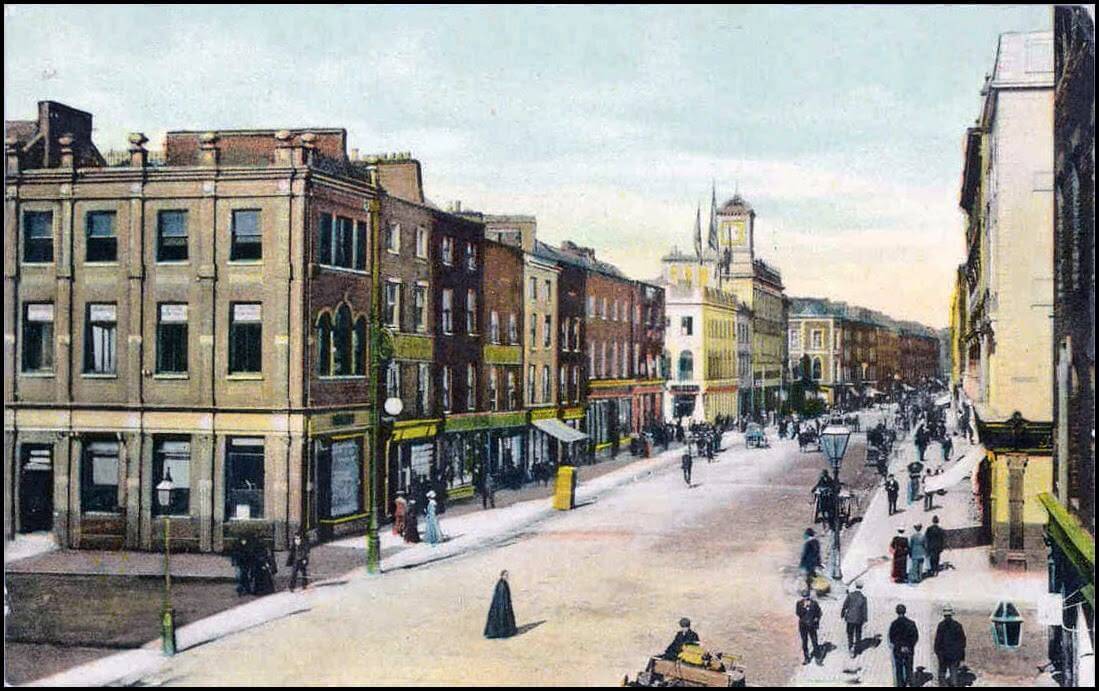 In 1871 a case of seduction was brought to court by George Cannock, the founder of Cannock‘s department store against Patrick Lynch, the owner of the George Hotel in respect to Cannock’s 18 year old daughter Mary who found herself pregnant from an affair in August 1870. The case was tried in Cork but reported both nationally and internationally.

The following report comes from The Morning Examiner 1 April 1871:

Extraordinary Charge of Seduction in Ireland

An extraordinary charge of seduction has been the subject of an action just tried before the Lord Chief Baron at Cork. The plaintiff, Mr. Cannock, is a leading member of a well-known commercial firm, and the defendant, Mr. Lynch, is proprietor of the “George” Hotel, in Limerick.

The plaintiff’s daughter, for whose alleged seduction by the defendant be claimed 1,000l. damages is a young girl in her 19th year, and of great personal attractions. The defendant is 50 years of age, has been 23 years married, and has a wife and eight children living with him. His defence was an absolute denial of the charge.

The plaintiff’s case was that, having realised a large fortune – 150,000l. as was stated – he retired from business and resided in London, where, in 1869, the defendant was introduced to him and his two daughters, the elder of whom was the subject of this action. They were the children of his housekeeper, he himself having never been married.

He became acquainted with the defendant through a brother of Sir Peter Tait, he became involved in his embarrassments, and lost so much of his fortune that he was obliged to return to Limerick and resume business.

The intimacy with the defendant was continued, and Mr Lynch was often a visitor at the house, and had opportunities of seeing Miss Cannock alone, which he took advantage of to commit the injury alleged. On part of the defendant evidence was produced to show that the young lady kept company with two young men, one of whom it was suggested was her paramour.

She had been engaged to be married in London to a Mr Sadler, but the engagement was broken off when the plaintiff’s circumstances were reduced. In Limerick she flirted with a bank clerk, named M’Candy. She admitted, in her cross examination, that she had promised to marry him, and that she used to go out and walk in the evening with him. Letters were exchanged between them, which they agreed lately to destroy for the purpose of preventing their production on this trial.

The defendant’s wife deposed that her husband was going out, with her knowledge, to walk with Miss Cannock, at the request of that lady. She had interviews with the plaintiff and his daughter in December last in which no suggestion of improper conduct on the part of her husband was offered, but Miss Cannock seemed very delighted that she was to go back to school. There had been rumours afloat about young men visiting the house in her father’s absence, and the witness advised her not to receive such visits. In one of the interviews she admitted that she was enceinte, and after that interview she and M’Candy – who, she admitted, was aware of her state for she told him herself – arranged to burn the letters which passed between them. She acknowledged that she was under the doctor’s care between the 15th of August  and the 1st of September, the period in which the alleged improper intimacy with the defendant occurred.

Mrs Lynch swore that at the last interview but one with the plaintiff’s daughter, the latter, although she mentioned the fact of her misfortune, did not say who was the cause of it, and on the last interview she did not tell for a long time, but she ultimately did say it was the defendant. Mrs. Lynch became indignant, and said she did not believe it. The following letter was written by Miss Cannock in January last to the defendant’s wife:-

“Miss Cannock presents her compliments to Mrs Lynch, and begs to say that having heard that she accused Mr M’Candy of the misfortune which befell her, she is ready to swear by all that is sacred that no one but your husband is guilty. Spoken words may be forgotten or misinterpreted, or exaggerated. Miss Cannock’s purpose, therefore, in writing is that Mrs. Lynch may have no doubt as to the veracity of her statement in which Miss Cannock’s absence. Let this letter be laid before Mr. Lynch and if he has any regard for truth he will be obliged to acknowledge that such is the case. Miss Cannock considers this letter of great importance, and should the time go to law, she requests Mrs. Lynch to keep this letter, which she will keep a copy.”

“Miss Cannock -I have received your letter today, and shall candidly tell you my opinion of it. I do not believe a single word you have stated. About May last your father received an anonymous letter, warning him with regard to the conduct of you and your sister. During that time my husband was in London. Madame de Prins helped you out of that difficulty. When you were ill in June your friend, Mr. M’Candy, requested Madame to take you to Dr. Kavanagh. What was the matter with you then?

You asked Mr. M’Candy to marry you and he refused. You then wrote to him and told him you state, and there is no one you have been more intimate with since and all this and more your friend Madame knows. Now, to save yourself with your father, you calumniate and belie my husband. I went to see your father this morning to arrange for an interview between your father and my husband, who is ready to tell the truth. I was very  politely denied admittance to Mr.Cannock. Had I known as much as Madame de Prins I might have saved you from disgrace and your poor father this great trial. No, to conclude a painful subject, if all you have told me were true I would be the last you would tell. You had better show this letter to your father. May God forgive you!      F.Lynch”

Madame de Prins, referred to in this letter, was the wife of a French teacher of music, and kept a school at which Miss Cannock received lessons and Mr M’Candy had apartments. Evidence of the most contradictory kind was given by several witnesses. The defendant denied categorically all the statements of Miss Cannock and swore that on the 15th of August, which she fixed as the first occasion of impropriety, he did not visit her at all, but was at home with his family. The French teacher contradicted Mrs. Lynch, and deposed that she expressed her belief of her husband’s guilt; and finally a rebutting case was gone into, and Mr. M’Candy reputed the imputation of misconduct on his part.

After an exceedingly long and sensational trial, a verdict was found for the plaintiff.

Lynch was proved guilty and Cannock was awarded £100 plus costs. As for Mary, she gave birth to Josephine Frances on 6 May 1871 and would go on to marry John Macandie (M’Candy) three years later in Gloucestershire, England.