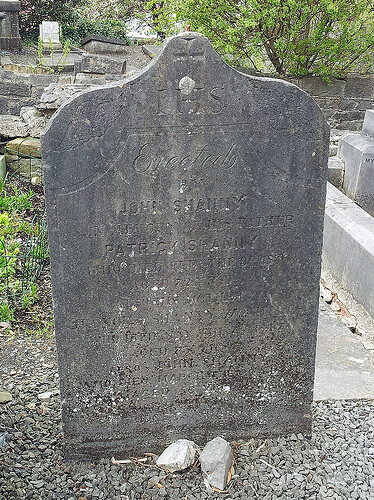 It is most likely that there were many others in this grave though as it was a Roman Catholic grave in a Church of Ireland graveyard the names were not always recorded or the church itself was not always informed of a burial. 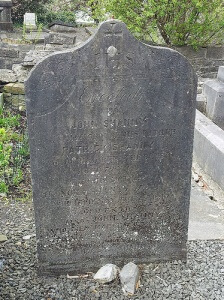 This headstone is featured in Rediscovering Limerick Episode 6

Last Will and Testimony Records:

Shanny Mary 15 December, Letters of Administration of the personal estate of Mary Shanny formerly of Shannon Street but late of Roches Street both Limerick who died 23 May 1906 at latter place were granted at Limerick to Parick Shanny, Fish merchant and husband. Effects £146 7s 6d. (1906)

On Sunday Morning at the residence of his mother in Athlunkard Street at the early age of 31 years, Rev. John Shanny R.C. Chaplain to the Convent of the Good Shepherd very much regretted (Limerick Chronicle) (January 1861)

16-year-old James Shanny was seen paddling a fishing cot up the canal at half past eight on the 17th of August 1904. He had been on his own so after a couple of hours passed and he did not return home as expected fears for his safety were foremost in his families minds. A search was carried out and the cot was found bottom upwards some distance up the waterway, his body was picked up a few yards from the craft. (Limerick Leader)

The death of Mrs. Shanny, wife of P.Shanny, 4 Roches Street, which took place a few days ago, has been heard of with deep regret by a very large circle of friends. The funeral took place on Friday forenoon (24 May 1906), the large concourse which attened testified to the high esteem in which the deceased lady was held (Limerick Chronicle)

‘A sad drowning tragedy occurred in the Shannon near Mountshannon, Castleconnell early yesterday morning, resulting in the death of Patrick Shanny, aged about 70 years, of Park, Limerick. It would appear that the deceased, whilst engaged fishing with his son, John, and a third man named Peter McNamara, was seized with cramps and toppled into the river. He was quickly brought ashore by his companions, who applied artificial respiration but without success. The body was later removed to the morgue pending the holding of an inquest.’ (Limerick Leader) & (Limerick Chronicle)

Stories of the Shanny Family