Spinster daughters of wealthy families often became independent following the deaths of their male relatives. Some of these women in Limerick survived their parents and siblings by decades. However, this brought up a new issue, that of inheritance.

Maria Wilson died at her home on 61 Catherine Street, Limerick on the 27 June 1890. She out lived her parents and all of her siblings. She was the daughter of Richard and Frances Wilson of Ballinacurra. Her father died in 1823 and her mother passed away in 1857. The Wilson family was from Caherconlish and operated a brickworks near Ballinacurra Turnpike.

When Maria passed away, she had £747, 5 shilling and 5 pence to her name. As all of her known next of kin had predeceased her, her estate was granted to the executor of her will, James Welply, a land agent of Corbally, on 7 November 1892.

This was not the end of the story as a few months later, a relative of Maria by the name of Trousdell made a claim on the estate. This lead to a call to the public asking for any persons who deemed themselves her next of kin to contact the Vice Chancellor of Ireland at the Four Courts in Dublin to prove their claim before eleven o’clock in the morning of the 16th April 1894.

Trousdell was most likely a grandnephew of Maria’s sister, Frances Wilson. Frances was married to Richard Trousdell in St Mary’s Cathedral in August 1824. The couple had at least one son, John Wilson Trousdell, who was baptised in St Mary’s Cathedral on the 4 July 1825. John passed away in Belfast in 1856, aged only 30 years. It is not clear how the case turned out but we can presume that Trousdell did receive his share of the inheritance. 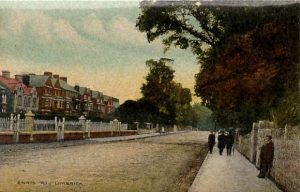 Mary Dickson Alley was a spinster who lived to the age of 87. Her sister, Jane Alley, also married a Trousdell, John the eldest son of Alexander Trousdell. Mary died at “Olivette” Ennis Road in 1915, a home she had shared for at least five years with her niece Gertrude Julia and her husband Eldred Curwen Holliday and family.

The Alley sisters were the granddaughters of William Alley and Martha Kendal. William was one of the subscribers to the Pery Square Tontine in 1808, his subscription was based on the life of his son Thomas, who was then aged 13.

The Alley sisters’ father was William’s younger son Gabriel , candle manufacturer and soap boiler based in Mary Street in 1824. In the 1830s, he had moved to Mungret Street and opened a tobacco factory. By 1840, he had moved one more time to 18 William Street where he continued the tobacco factory.

Gabriel married Charlotte Dickson at St. John’s Church in November 1819. The couple were buried in the same churchyard, Charlotte in 1841 and Gabriel in 1847. Their son, John, predeceased both his parents in 1836.

In April 1839, Gabriel Alley summoned John Kennedy and William Hauton for placing posters around the city ‘cautioning the public not to deal with him for snuff or tobacco’ as they felt he had not complied with the rules of their group called the ‘Journeymen Tobacconists’. It was believed that the dispute stemmed from an incident when one of the journeymen tobacconists was away from his store for two days. Alley asked a boy who worked in the store and was ‘handy at the business’ to finish the manufacture of the dry leaf in the absence of the man.

Remaining a spinster had both advantages and disadvantages, as these women aged they did not have the support that a husband and children could bring. On the other hand, spinster women also had a personal freedom that was not afforded to married women.