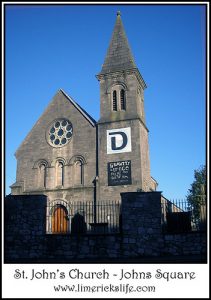 St John’s Church, Church of Ireland stands on the site of an earlier church in the Irish town area of the city, which dated from the 1200s. It is located at one end of John’s Square, the first development of Newtownpery.

The walls around the graveyard were built in 1693 while present church was erected in 1852. The graveyard is the burial place for many well-to-do Limerick families, including the Russell’s who ran the largest mills in Limerick in the mid-nineteenth century.

The church fell into disuse in the early 1970s as the Anglican population of Limerick city fell and was handed over to the Limerick Corporation in 1975.

The interior was completely redesigned and for a period the church was used as a base for the Dagdha Dance Company and is now the hub for Dance Limerick.

Transcriptions and Photographs of the attached graveyard