St. John’s Fountain was built as in the 1860s indoor plumbing was non-existent in the older sections of Limerick City, such as Irish Town, during this period there was wide spread disease as a result of this lack of clean water. This was a time of reform in health care and a group of concerned citizens got together and arranged for a free water supply in the John’s Gate area. This area had been transformed with the building of St. John’s Cathedral in 1856.

St. John’s Fountain also known as Cathedral fountain is situated in front of St. John’s Cathedral it is a square free-standing limestone and marble structure in a Gothic Revival style drinking fountain. It was built in 1865 to that once met the sanitary and health requirements of the local population of the parish . 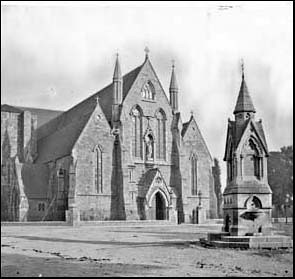 St. John’s Fountain C. 1870 before the Spire of St. John’s Cathedral was completed.

It had four spouts one of each of its sides. Iron goblets were attached to two of its spouts to provide on the spot drinking facilities for the public at large and help them fill small containers easily. while larger vessels were filled at the other two spouts.

There are four plaques on the fountain reading:

There is also a benchmark on the fountain, you can read more about benchmarks here.