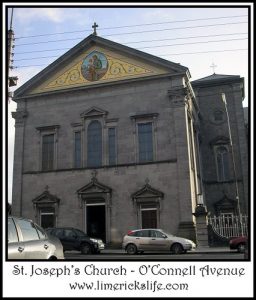 St Joseph’s Church on O’Connell Avenue was built in 1904. It was originally used as a chapel of ease to accommodate the growing population of  St Michael’s parish.

The architect of the church was Mr W E Corbett and the builders were John Ryan & Sons. Mr Byrnes gave the site for the church.

The church has acquired the nickname ‘the church of the spite’ because it is situated across the road from the Jesuits’ Church of the Sacred Heart.

At the time of the building of St Joseph’s, the then bishop, Bishop O’Dwyer objected to the Jesuits using a two-tier system for worshippers. The wealthy people sat at the front of the church while the ordinary people sat at the back. Despite attempts from Bishop O’Dwyer, the Jesuits refused to change this system and it was decided that a new church was needed which would not have this practice of separation.

The Freemans Journal of April 25, 1904 wrote about the opening of St Joseph’s Church:-