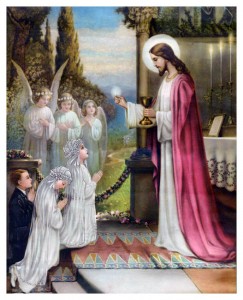 This beautiful home video from 1978 shows the First Communion ceremony in St. Michael’s Roman Catholic Church on Denmark Street. Father Michael Manning was the parish priest at the time having taken on the role, and the parish extends from Bank Place to Cecil Street.

St. Michael’s Church which stands on Denmark Street today replaced an older building on the same site. The older building was erected by Rev. Thady Lynch P.P. built a church on this site between 1779 (when the foundation stone was laid) and 29 September 1781 when the church was officially opened. The land on which it stood was donated by The Arthur family of Arthur’s Quay.

One hundred years later in 1881 a new church by Martin Morris was erected at a cost of £7,400, this is the church we see today. There was a previous St. Michael’s Church near to this location this was destroyed during the 17th century sieges and all that remains is the graveyard of St. Michael’s.

The film then moves to Kileely in the Thomondgate area.