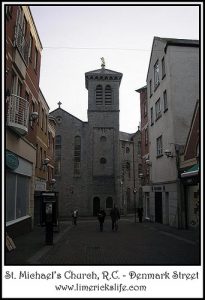 The first St Michael’s Church stood outside the walls of Limerick for hundreds of years. In what today is the street off St. James’s Street which runs parallel to Michael Street.

The parish of Saint Michael’s is one of the five original parishes of Limerick City. The Down Survey of the 1650s references the parish of St Michael’s as a desolate area containing

“a partly ruined castle and mill seat at Beall na Corrie (Ballinacurra); a few thatched cabins; the Priors mill near the churchyard and a few gardens belonging to the vicar and Archdeacon and some city gentlemen.”

The originally medieval parish church was dismantled after the Cromwellian Siege of 1651. The church was in ruins by 1654. All that remains of this site today is the graveyard of St Michael’s.

The church was enlarged in 1805. It was used for more than just religious purposes. The Irish politician Daniel O’Connell used it as a speaking post for some of his rallies.

This building to be replaced in 1881 by the structure with the golden angel on the top. This was designed by the Limerick architect Martin Morris. Morris also designed St. Mary’s Church in Cahir, County Tipperary in 1888.