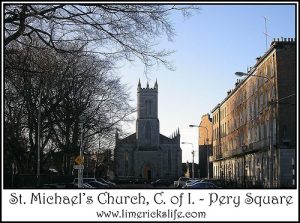 St Michael’s Church, Church of Ireland was consecrated in 1844, it is one of two churches in Limerick known as “the sinking church” the other being the Presbyterian Church on Henry Street.

The reason it was thought to have sunk slightly over the years was because it was not built on bed rock. There was a limestone quarry in what became the People’s Park, and it did not extend as far into the church’s foundations as expected.

The building was designed by the Pain Brothers who were responsible for the design of many of the building and bridges in the city at this time.

It is located at the end of Barrington Street and Pery Square. The original plan for Pery Square saw terraced Georgian houses on all four sides of the People’s Park which would have seen St Michael’s Church at its heart.

The church was built to replaced an older church St. George’s on the corner of O’Connell Street and Mallow Street, which was founded in 1789. As Newtownpery grew in size the older church could not hold the increased parishioners wishing to worship in the church. George’s Street, later O’Connell Street was named after this church and St George the patron saint of England.