St. Munchin’s Church (Church of Ireland) built in 1827. Designed by The George and James Pain who gave the building a Gothic style. The four pinnacles at the top of the tower provide this church a distinguished aspect. The church is situated in King’s Island, between the Bishop’s Palace and the Villier’s Alms Houses. It was built in 1827 and was renovated in 1980 by the Limerick Civic Trust.  It was a used for a period by the Island Theatre Company and is now used as a store for Limerick Civic Trust. 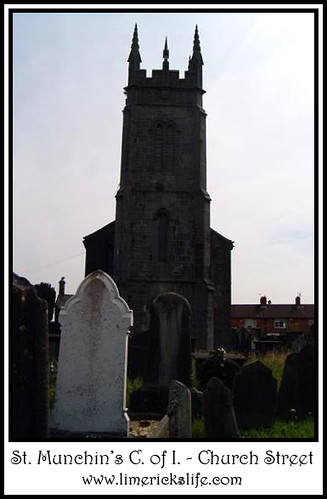 St Munchin is the patron saint of Limerick. There are many ledgends the specific life of Munchin it is believed that he lived in the late 7th century. St Munchin founded a church called Cill Mainchín on Inis Sibhton. Many legends surround Munchin one of which is believed that whilst building a church in Limerick he asked the locals to help, but they would not so he placed a curse of which the strangers would flourish and the natives perish.