A Stitch in Time, a History of Limerick Clothing Factory 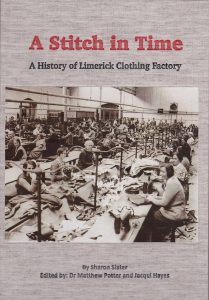 Nineteenth century Limerick was a business-friendly city. Even when the Irish economy stagnated after 1815, Limerick continued to enjoy economic growth. Customs receipts in the port increased from £70,000 in 1821 to £148,000 in 1840.  At the same time, the necessary infrastructure, created to support the business sector, was established.  Between 1750 and 1820, a comprehensive Irish road network was created by the grand juries, a canal linking Limerick and Killaloe was opened in 1799 and the railway came to Limerick in 1848. The port of Limerick developed significantly as a result of the construction of a new floating dock between 1849 and 1853.

It was into this economy that a young man by the name of Peter Tait arrived from the Shetland Islands off the coast of Scotland. Peter was the son of a Scottish merchant who was wealthy enough to afford to send all of his children to school. While Tait’s older siblings, Barbara and James, left the islands to find their fortune in the clothing trade in England, Peter most likely replied to an advertisement from Limerick looking for educated Presbyterians to work in the Cumine and Mitchell stores.

There are several misconceptions regarding Peter Tail. First, Peter’s sister was not married to Martin Honan, Mayor of Limerick. Martin Honan married Anne Kane of Quinpool in 1826 (she out lived him by 18 years). Furthermore, Tait’s elder sister would only have been 6 years old, being born in 1820, at the time of this marriage. Next, Peter Tail did not arrive in the city as a pauper, with only 3 shillings and 6 pence to his name. His father would have been considered middle class in today’s terms.

Tail was employed in Cumine and Mitchell and did live above the store, which was the norm for apprentices at the time. He did sell shirts on the docks. He was the founder of the Limerick Clothing Factory, which was the highest employer of women in the city outside of service roles. He did not do this alone, it was through the contacts his sister and brother had developed in England that supplied his largest contracts.

Tait manipulated his public appearance throughout his time in Limerick.  He went as far as having Michael Hogan, the Bard of Thomond, as his personal poet. Unsurprisingly as Hogan was under the pay of Tait, all of his reviews were positive. Someone who only read of Tait’s accomplishments in the Limerick Chronicle can be forgiven for thinking that he was the saviour of the city.

We see this kind of media manipulation today and try to teach the public about deciphering fake or inflated news over the real story. This goes for historic press who all had their own bias.

Despite his personal failings, it was true that Tait had built the largest factory to employ women in the city, which the poorer families of the city in particular benefited enormously. Limerick city’s population in 1841 was 48,391 with 5,519 more women than men; unemployment rate was at 1,736 for men and 11,871 for women.

It was widely known that Tait supplied the uniforms for the Confederate Army during the American Civil War. This turned out to be his downfall. Tait was due payment for goods supplied, but as the Atlantic coast of the southern states of America were being patrolled, the payment in the form of cotton never arrived.

This caused Tait to declare bankruptcy. This declaration had an immediate detrimental impact on the factory, which after fulfilling some other contracts was forced to close. This ended Tait’s involvement, not only with the clothing factory but also with Limerick in general.

A number of local businessmen could see immediately the impact the loss of this factory was having on the city. Therefore, they bought the company out of bankruptcy for Limerick. The factory was taken over by a board of management that consisted of important Limerick business families such as the Banntynes, the Spaights and the Russells. The Board soon hired an astute businessman, Edward Taylor, from England to clean up the company’s books.

Taylor was quickly promoted to the role of general manager and began to revolutionise the company once more. Under Taylor’s leadership, the social conditions for the general worker improved dramatically. He introduced a pension scheme, long before this was a requirement and even before the government had implemented their pension scheme. He hired a doctor to tend to the well-being of the staff. He promoted social clubs within the company to bolster moral. Soon the chaos that Tait had left in his wake was forgotten as Taylor brought the company to the close of the twentieth century.

Taylor was succeeded by a series of men who were keen to leave their own mark on the company while continuing Taylor’s social welfare ethos. As the world entered into a series of conflicts in the first half of the twentieth century the factory flourished. They clothed both the Irish Volunteers and the British Army. This did not seem to bring them negative attention other than small incidences of cloth being stolen on route to the factory.

While under the control of the Board of management the Limerick Clothing Factory supplied uniforms for the Irish Volunteers, including the uniform worn by Éamon de Valera. They also supplied the first run of An Garda Síochána uniforms.

As the wars ended, so did the factory’s army clothing contracts. From the 1920s, efforts were made to enter into the civilian market as well as continuing their trade in non-military uniforms. Even today, over forty years after its closure, Limerick men remember being taken to the factory to be measured for their First Communion suits.

Contracts continued to slow and in 1969, the English company Aquascutum bought out the Limerick Clothing Factory along with Danus Clothing. This came at a time of crises in trade as oil prices sky rocketed and cheap goods flooded the market from Europe. The factory simply could not compete. In 1974, the Limerick Clothing Factory closed its gates after over 120 years in operation.

Sharon Slater, in A Stitch in Time, a History of Limerick Clothing Factory, weaves together the threads running from Tait’s foundation until the factory’s closure in November 1974. Creating images of life for those who worked for over 120 years, dressing not only the Irish but also soldiers throughout the world.