Where possible a link to the 1911 census has been added to the street name.

O’Callaghan’s Strand (North Strand/Farrashone) and O’Callaghan Avenue: named in 1934 after Michael O’Callaghan, who was Mayor of Limerick in 1920 and who was shot by British Auxiliaries on the 7th March 1921 during the War of Independence.

O’Connell Street: (formerly George’s Street) and O’Connell Avenue (formerly Military Road) were named after Daniel O’Connell (1775-1847), who in 1829, after the Catholic Emancipation Bill had been signed by King George IV, became the first Catholic to sit in the British House of Commons since the Reformation because he had initiated and led this campaign, he became known as “The Liberator”. It is interesting to note that the O’Connell Monument in the Crescent was unveiled in 1857. It took until 1913 before the street name changed. 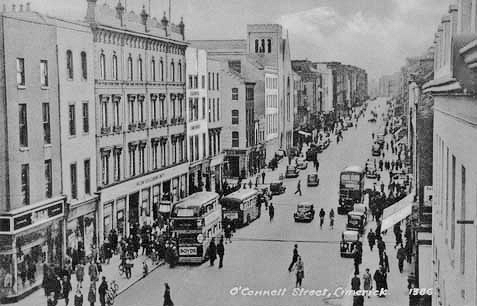 O’Curry Street: (formerly Frederick Street), named after the scholar Eugene O’Curry (1798-1862) who was employed as a timekeeper during the construction of the Wellesley (now Sarsfield) Bridge. He subsequently worked in St. Joseph’s Hospital, and with the Ordnance Survey as a place name officer.

O’ Higgins Drive: named after Kevin C. O’Higgins, (1892-1927) who, when Minster for Justice in the Irish Free State Government, set up the Garda Siochana.

O’ Halloran’s Range : Located in the Garryowen area of the city. The Limerick Corporation Employees Society was based in Number 4 in 1898, founded in 1980, they would go on to become part of the ITGWU.

Old Courthouse Lane: named from its proximity to an old Court house, which was located in this area.

Old Thomond Bridge: was built around 1210 and had fourteen arches. A drawbridge was erected at the seventh arch, as was a gate which was called Thomond Gate. This bridge was very narrow and was replaced by the present Thomond Bridge in 1838.

Old Windmill Road: (also known as Tanyard Lane) was named after Mahon’s Windmill which was located in the vicinity of St. John’s Pavilion.

O’Malley Park: named after Donough O’Malley (1921-1968), who was Mayor of Limerick in 1961 and Minister for Education when free secondary education was introduced.

O’Neill’s Quay: (now The Bishop’s Quay). It appears that quays were sometimes named after the merchants who imported through them, and the records around 1840 indicate that a Francis O’Neill of Henry Street was a corn, coal and West Indian merchant.

O’Sullivan’s Bow : Located in the old Abbey Area of the City.

O’SuIlivan’s Place: named after James O’Sullivan, a tobacco merchant who carried out a lot of the development work in this area, including the building of Clare Street (then called New Clare Street). These were built in 1800.