The Mulcahy family of Abington, Murroe lived a life typical of so many Irish farming families at the turn of the twentieth century. Their home would have been the standard four-roomed cottage prevalent in the area at the time. The front door opened into the kitchen, the main room for the entertainment of guests, which was heated by a turf fire in a large open hearth. During the dark evenings lighting was also provided by a few oil lamps and commonly candles dotted around the room. Two smaller rooms led of from this room, these would most likely have been used as bedrooms and there would have been one more “loft” type bedroom, reached by a ladder or small stairway opposing the hearth in the main room.

Life back then, although simpler, was a great deal harder with many day-to-day dangers and perils, especially the prevalence of many terrible diseases that have become almost completely eradicated in our modern life.

On February 6th 1900 the Mulcahy’s realised with grave concern that four of their children who had recently contracted Typhoid fever, were growing increasingly worse. Typhoid fever was a potentially fatal disease with a high mortality rate when untreated and was extremely incapacitating to those who survived. By this stage the Mulcahy children would have developed some of the symptoms of this infection; these may have included a prolonged fever, general malaise, chills, rose-coloured spots on the chest and abdomen, constipation or diarrhoea. As parents the Mulcahy’s must have been very distraught indeed.

That evening Mr Mulcahy set out for the doctor, one Mr. C. P. Tennant who served as local doctor for the Cappaghmore and Murroe area. The two men then returned promptly by horse and cart to Mr. Mulcahy’s residence, on this journey Mulcahy carried with him two bottles, one of whiskey and the other of carbolic acid, which was intended for disinfecting purposes. Upon arrival Mr. Mulcahy handed both bottles to his wife. Dr. Tennant then proceeded to treat his four young patients who would have been confined to one of the small bedrooms.

When he had finished treating the children and was set to leave Mrs. Mulcahy offered him a glass of whiskey to warm him on his journey home, which he gratefully accepted. She poured the drink into a coloured claret glass. The sun had already set that evening and there was only the dim light from the fire, few a lamps and candles to illuminate the room. Indeed, it was remarked at the time that the lighting was exceptionally poor, as Dr. Tennant sipped a portion of his drink.

It was just as another glass was being poured for a second guest in the house that they realised a dreadful mistake had been made, the poison label on the bottle being noticed by one of those present. The carbolic acid was a colourless liquid, indistinguishable from whiskey in the coloured glass under the poor lighting, and its characteristic tar odour would not have been detected over the smell of turf burning in the hearth.

Dr. Tennant, a man in his fifties, straight away called for a mustard and hot water mixture to be prepared, this was a standard procedure at the time to induce vomiting, but sadly it failed on this occasion to have the desired effect. Dr. Tennant’s sufferings grew increasingly intense and another doctor, John O’Callaghan of Pallasgreen, who had been called, arrived as soon as possible although this was too late to aid the ailing man who died within twenty minutes of the arrival of Dr. O’Callaghan. 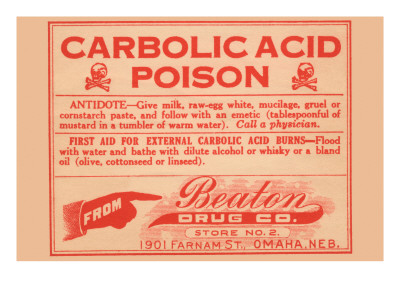