Thomond Bridge – The Bridge of Many Arches

A bridge stood on the site of the modern Thomond bridge for some 800 years. It connected the old walled city of Limerick with County Clare via Thomondgate.

The modern bridge was opened in 1840 after almost five years of construction. It replaced a bridge from the 14th century. The older bridge contained a drawbridge and in September 1691 during the final siege of Limerick the drawbridge was raised, leaving hundreds of citizens attempting to get into the city to fall into the river or killed by the Williamite army. This tragedy led to the talks for the Treaty of Limerick.

Designs were drawn up by James Pain for a new Thomond Bridge, but it took 25 years and a collaboration with his brother George to see the bridge erected. The Pain Brothers‘ work – includes Dromoland Castle, Clare, Blackrock Castle Cork, St Michael’s Church, Pery Square.

The bridge cost a total of £10,000 and a gothic-style toll-house was erected to recoup costs. Freemen of the city did not have to pay the toll.

The plaque of the bridge mentions the name of Mayor Martin Honan who was mayor in 1843. He and his corporation had removed the previous stone with Mayor Richard Franklin’s name on it, as Honan’s corporation believed that ‘although the bridge was built by the old corporation but paid for by the new one’.

The Bard of Thomond, Michael Hogan, was born in Thomondgate so would have crossed the bridge. He based two of his famous ballads on this bridge. The tale of Shawn O’Scuab (John of the Brushes), who accidentally became Mayor of Limerick when he crossed the bridge while the Corporation was arguing over who would be Mayor. Also, the tale of the Drunken Thady who was tossed over the bridge by the Bishop’s Lady. Supposedly, his nail marks are embedded into the bridge.

There is a benchmark in the centre of Thomond Bridge. 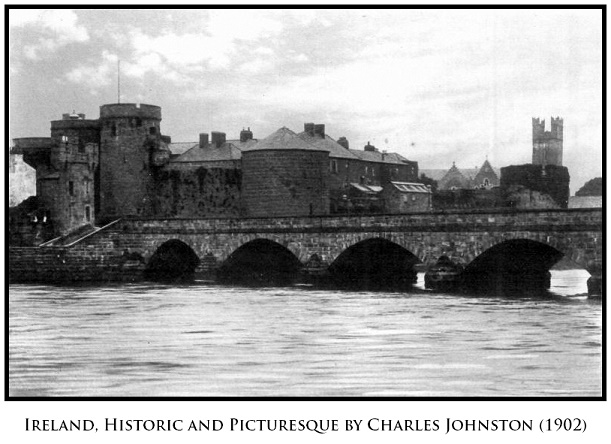