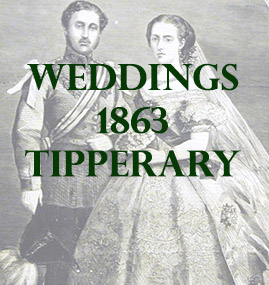 In the Roman Catholic Church of Castlebar, Simon P. Armstrong, Esq., of Tipperary to Mary Elizabeth, daughter of the late Henry Murphy, Esq., of Castlebar

May 12, at the Cathedral, Thurles, by his Grace the Most Rev. Dr. Leahy, Archbishop of Cashel, assisted by the Very Rev. Canon Wall, brother to the bride, James T. Morressy Esq., second son of Theobald Morressy, Esq of Tipperary, to Joanna Mary, eldest daughter of the late Patrick Wall, Esq., of Clonmel.

On the 18th inst., at Adare by the Rev Mr O’Grady, P.P. Mr. Patrick Moloney of Nenagh to Margaret, daughter of Mr Michael Cregan

In Cashel, Richard Dolan, Esq., to Maria, daughter of Cornelius Hanly, Esq., both of Cashel

In the Cathedral of St. John the Baptist, Cashel, James Loney, Esq., of Erryville, to Isabella Joanna, daughter of the late Richard Wood, Esq., M.D., of Cashel

At St. Peter’s Church, Dublin, Henry Newill, Esq., of her Majesty’s Indian Civil Service, to Anna Elizabeth, daughter of Howard Nothercoat Egan, Esq., of Sharragh, in the county of Tipperary