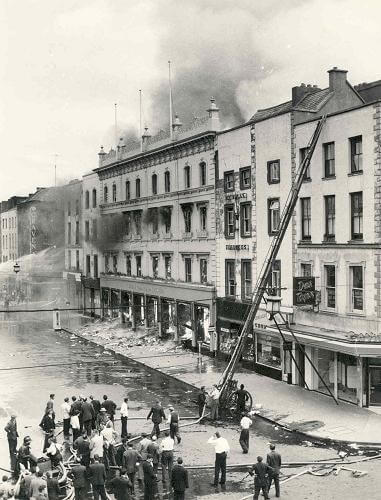 The Todd’s department store occupied about four-fifths of a large city block fronting onto O’Connell Street in Limerick city. On Tuesday, 25 August 1959, at 11 in the morning, a fire was noticed and reported in the building. By 12:30 the entire block was a blazing inferno. In the end, Todd’s, Burtons, Liptons, Goodwins and Cesars were completely gutted. While Gayware, Cromers and Nicholas were badly damaged, they were able to be restored.

The rubble from the fire was taken to the baths on the Mill Road in Corbally. It was spread in the area where estates such as Silverbrook and Meadowbrook exist today. At the time, it was alongside the city nursery where they grew the plants for the city. For years locals could see bits of the Todd’s pillars sticking out of the ground. There is a story that when the fire was raging it was a wall of flames. It is speculated that you could hardly see the actual wall on the William Street entrance and that a fire truck was parked there and part of it actually melted with the intense heat. All the tyres of the Garda bicycles chained to the railings of the barracks across the road on William Street all melted to the ground also.

The following is a personal account of the fire

“It was during that time frame that Todd’s went up in flames, and we parked the Red Cross Ambulance at the corner of Bedford Row and O’Connell St. Our first priority was to evacuate the patrons from Sullivan’s Bar in Thomas St as smoke started to enter from the restrooms area. During this trek we also liberated some Hennessy’s Cognac which was taken to the Ambulance, Mullany’s Restaurant donated a large Churn of fresh tea, and this is when we went slightly wrong. We added the contents of our bottles to the churn, and it tasted pretty good! Now the bad news, I went to relieve the Fireman with the hose trying to dowse the flames above the jewellery shop next to Todd’s.

As the firemen got replenished, we were slightly inebriated and suddenly the entire front of Todd’s facade crashed to the ground. We could hear a gasp from the onlookers that gathered, but when the smoke and dust settled we were both still erect aiming the hose at where we thought the window was previously. Lacking pressure in the hose, (The tide was out) we were unable to break the windows of the Hairdressers above Burtons Tailoring on the corner of William St. This is when we reverted to throwing stones to try and break the glass. Unfortunately, we could not hit the side of the building as the bricks we threw were landing and causing havoc in William St. Somewhere around this time, we lost one Fire tender, and resumed trying to prevent the telephone wires leading into William St Garda Station from melting completely.

To those unfortunates who chained their bikes to the railings outside the station, the tires had melted to the footpath. Faced with a lack of hoses, no pressure, the fire raged on. I resorted to throwing a steel bucket filled with water through the Plate glass window of Burtons store front on William St. This enabled the fire to take control and burn the entire block from William St to Thomas St to ground level and below. The only remaining feature was a large safe on what was the second floor. Day’s following they uses a helicopter to assist in demolishing what we failed to achieve. And a good time was had by all”

Photos of the department stores, the fire department, onlookers and aftermath of the fire 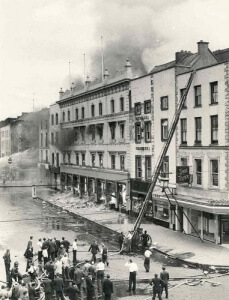 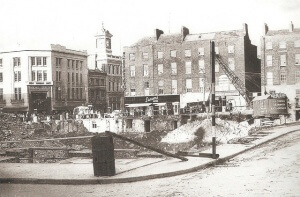 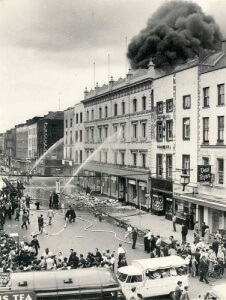 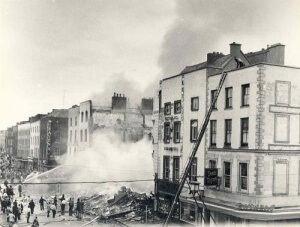 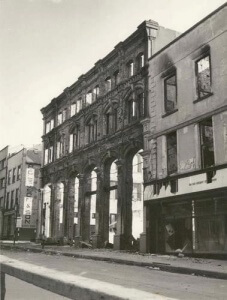 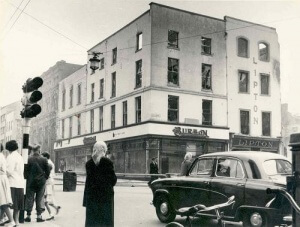