Riverfest festival Limerick took place on the May Bank Holiday weekend 2013 once again saw Limerick inundated. The Riverfest festival is fast becoming a highlight on the Limerick City Calender. During this years festivities there were soapbox races, barmen races, boat races, free tours as well as plenty of food to taste. The Great Limerick Run also took place during this weekend as well as the Abbey Fishermen Gathering. We are looking forward to Riverfest 2014 already. You can check out the Riverfest Facebook for photographs from the weekend. 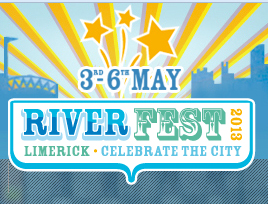 Although we missed out on much of the activities of Riverfest due to our involvement in the Abbey Fishermen Gathering, we still managed to get out and enjoy Mondays events such as the selection of vintage cars in Arthur’s Quay Park, making it a hive of activity. IT was wonderful to cross to Clancy Strand and see a buzz in Arthur’s Quay Park.

It was wonderful to see the Shannon River busy with boats, both large and small as we walked through the city and around St. Mary’s Park.