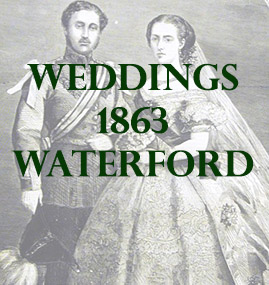 The following list contains marriages from 1863 that mention places in county Waterford, the year before the full civil marriage registrar comes into Ireland. Whether it was the marriage location, the ancestral home of the bride or the home of the groom.

These records were extracted from news reports of Irish Marriages published in the Limerick Chronicle, 1863: