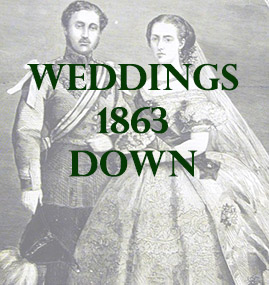 The following list contains marriages that mention places in county Down.

At Ballyroney, William Glenny, Esq., of Glenville, county Down, to Elizabeth, daughter of James McClelland Esq., of Edengarry, in the same county

In Belfast, Howard M Ferrars, Esq., to Charlotte Amelia, daughter of the late John George Stewart, Esq., of the county Down

In Dublin, James Andrews, son of John Andrews, Esq., J.P., of Courlin, in the county of Down, to Mary Catherine, daughter of Robert Andrews, Esq., LL.D., Q.C., Mountjoy-square, Dublin.

At Hillsborough, Jacob Halliday, Blackrock, Dublin to Annie, daughter of the late John Green, of Orrfield, Hillsbourough, County Down

At Banbridge Church, Edward Hudson Kinahan, son of the late Alderman Kinahan, of Merrion-square, Dublin, to Emily Isabella, daughter of the Rev. Daniel Dickenson, Rector of Seapatrick, county Down.