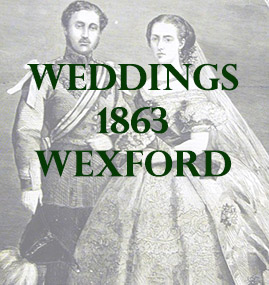 At the Church of the Immaculate Conception, Wexford, John Hinton, Esq., merchant to Mary Teresa, daughter of James Harpur Esq., ex-Mayor of Wexford.

At Johnstown Castle, Major the Hon. W . Forbes. Brother of the Earl of Granard, to Phillis, daughter of John Rowe, Esq., J.P and D.L., of Ballycross House, county Wexford, and niece of Lady Esmonde.