Who was William Mount Kidd, a Limerick grocer.

William Mount Kidd was born in 50 William Street, Limerick on 18 Sep 1869 at the home of his maternal grandfather. His parents were a Presbyterian couple James Morgan Kidd (1840-1909) (funeral report) and Isabella Fife (1841-1918) both of whom were born in Scotland but married in Limerick in 1 November 1864.

On June 1899 in the Presbyterian Church on Henry Street he married Flora Lizzie Upward. She was born in Cambridgeshire, England in 1862. At the time of their wedding he was living in Westfields at the time while she was living at  Park View, Corbally. The couple had no children.

He was living on Military Road (O’Connell Avenue) when the 1901 and 1911 census was taken. In 1901 he shared his house with his wife and servant Margaret McCarthey a 25 year old Catholic woman from Newcastle West. While in 1911 the couple shared the house with servant Margaret Connell, a 15 year old Catholic girl born in the city. He also lived at 4 Verona Villas, 2 Alexandra Terrace and Ballineer Ennis Road.

In 1904 he was cautioned for causing an obstruction outside his store at 103 George Street (O’Connell Street) with 6 bags, 8 ropes and 3 barrels. In 1907, he was find 2 shilling and 6 pence plus court costs of 1 shilling and 6 pence for adding water to butter before selling it. In 1913 he was fined 2 shillings 6 pence for having a bicycle on a public road after dark without a light. 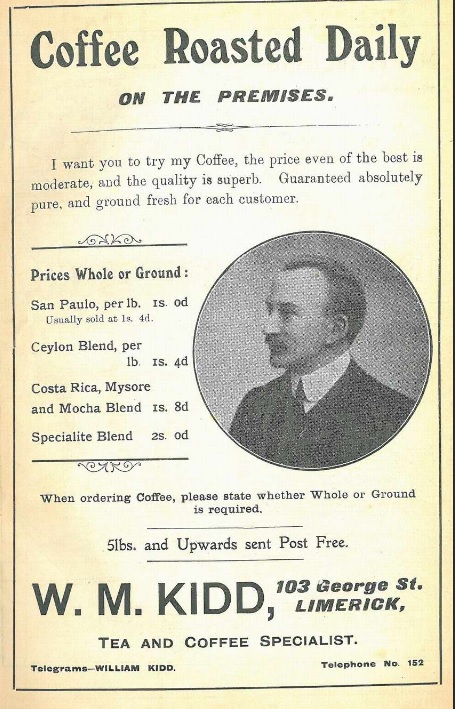 Advert for William Kidd’s store in 1912.