The Windmill of Windmill Street 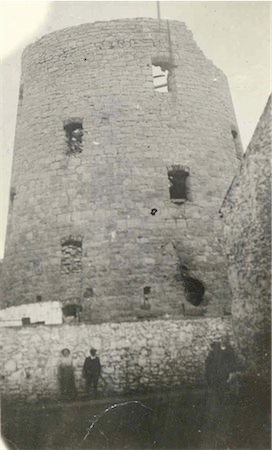 It seems strange today to imagine a windmill in Limerick city, even though Windmill Street , which runs from Henry Street to the Dock Road, is a constant reminder.

Lancelot Hill, brother-in-law to Edmund Sexton Pery, built the windmill in the late eighteenth century. Lancelot died in 1810 and the Chronicle stated of his death on February 3, 1810:

At 10 o’clock on Wednesday night last, at his house in George’s-street, that highly respected character, Lancelot Hill, Esq., at the advanced age of 76 – to attempt to describe his many amiable qualities, within the limit of our paper, would be impossible – whether we consider him as a Merchant, a Landlord, a Private Gentleman, or in the different departments which he filled, his conduct was worth imitation.

Laurence Durack then took over the mill, which was a large, tall, round, stone building, and which, pierced by windows, tapered inwards towards the top. The windmill was only in operation for a few years when it was struck by the first of two major fires on January 29, 1803. This fire did not damage the internal machinery and it was up and running quickly after the fire.

As the sails turned on the windmill on August 13, 1813, they witnessed a very interesting scene. A duel involving Daniel O’Connell, the Liberator and Maurice Magrath, who the previous day in court, had thrown a legal book at O’Connell’s head after O’Connell accused him of lying during a court case. This infuriated O’Connell, and after speaking to his friend, Nicholas Purcell O’Gorman, he insisted on challenging Magrath to a duel. This story was reported in the Limerick Advertiser (1806-1820) on August, 18 1813:

In consequence of a misunderstanding and warm altercation at the County Courthouse on Wednesday, between Counsellors O’Connell and Magrath, the parties met early on the following morning, at a field adjoining the Old Windmill; Mr O’Gorman who attended Mr O’Connell, and Mr Bennett, who attended Mr Magrath, measured the ground, and the parties were immediately placed on it.

A number of gentlemen here interfered, and after much conversation, Mr O’Gorman contested that the business should be adjusted, on Mr Magrath’s declaration from his ground, with a loaded pistol in his hand, that he lamented what passed, and was sorry for it.

Here Mr Leader threw in, requesting, as Mr O’Connell was well known to entertain no enmity to Mr Magrath, he should say on coming to his ground, that he was about to fight a man against whom he entertained no enmity. This proposal created some pause; but Mr O’Gorman at length, on the earnest interference of mutual friends, and after consulting for some time apart, with all Mr O’Connell’s friends present, assented.

Both gentlemen then came on their ground, with loaded pistols in their hands, and having complied with the above terms, immediately advanced amidst the loudest acclamations of all persons present, and shook hands.

They then stepped into the same carriage and returned to town together. Thus has ended, to the honor of all parties, an affair which created a deep interest in the public mind, from the estimation in which the two gentlemen were held, and from the vast and interesting stake depending on the event.

This was the last major event witnessed by the windmill of Windmill Street, as a second fire, which completely gutted the building, on November 15, 1813, consumed it. Jack O’Sullivan tells of this fire in an article for the Leader on June 9, 1952: “The machinery was all in motion, though on fire, a brisk gale of wind blowing, the night dark, and the spectacle awfully and sublimely grand”.

Luckily for the owners of the mill, Laurence Durack, it was insured by Globe Insurance, who paid out the enormous sum of £1,339 19s. 5d. on February 10, 1815. Laurence Durack died in February 1824 in Tarbert. He was buried in St John’s Churchyard, John’s Square under some controversy. The vicar of St John’s Church, John Fitzgibbon, wrote in the Chronicle the following day:

On or about five o’clock, the remains of the late Captain Durack arrived for interment at the above Church, attended by a large number of friends. My attendance on the occasion not being necessary, I was looking from my window, when my Sexton came to inform me that a Roman Catholic Priest, in canonical habit, was officiating in my church-yard, and had been struck by some persons unknown… on going to the churchyard I found there the Rev Mr McCarthy, (whether Parish Priest or Curate of Tarbert, I am not prepared to say) habited as above, going through the service of his church – I called upon him to desist, and warned him of the consequence of a breach of the law – all to no purpose, as he persevered amid cries of ‘Go on, we will die to a man, until you finish’… To speak of the manner in which I was myself treated would be to mention all that was insulting and disrespectful to the highest degree… I was induced to call on the military stationed in the neighbourhood, to protect me in my own Church-yard; but, no sooner had they come, than I ordered them away, determining with myself to withdraw, conceiving my duty was done, in forbidding this violation of the Law.

The windmill remained standing, though disused, for over 100 years. It was dismantled between 1915-16, when the stones were used as ballast on ships.